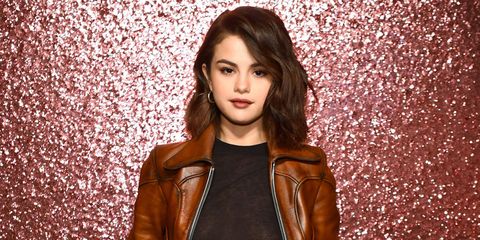 Just a day after enjoying a breakfast reconciliation with her ex Justin Bieber and hours after it emerged that she'd broken up with her boyfriend The Weeknd, Selena Gomez got some fresh air to clear her head by taking a bike ride with a friend through Los Angeles.

Yesterday, the 25-year-old star was all smiles as she went on a bike ride while playing her new song "Wolves" in the background, as seen on her Instagram Story.

In the video, the "Fetish" crooner can be seen cycling past fans at a local school's basketball court, laughing and joking with her friend as they whiz past.

Fortunately for her fans, the Texas-born star took a breather to meet students and pose for selfies.

The outing comes amid news that Gomez has reportedly split from her boyfriend of 10 months after going public with their relationship on the red carpet at the 2017 Met Gala in May.

An insider told People magazine that the Canadian singer's world tour and her filming obligations in New York have put a strain on the pair's relationship.

The news came hours after Selena was photographed at breakfast and sitting alongside her ex-boyfriend Justin Bieber during a church service in Los Angeles on Sunday.

Katie O'Malley Deputy Digital Editor Katie O’Malley is the Deputy Digital Editor, at ELLE UK.
This content is created and maintained by a third party, and imported onto this page to help users provide their email addresses. You may be able to find more information about this and similar content at piano.io
Advertisement - Continue Reading Below
More From Celebrity
Harry Said the Queen and Philip Were "Adorable"
Kate Middleton Played Tennis With Emma Raducanu
Advertisement - Continue Reading Below
Tom Felton Collapsed on a Golf Course
Ashley Olsen Made a Rare Red Carpet Appearance
Harry Carries Briefcase That Reads "Archie's Papa"
Meghan Markle and Prince Harry Arrive in NYC
Kate Middleton Looked Radiant in Cream
People Are Convinced Kylie Is Having a Boy
Kim Kardashian's Met Gala Ponytail Cost $10K
Megan Fox and Kourtney Posed for Sexy Skims Pics