You know how Saoirse Ronan stars in Ed Sheeran's video for "Galway Girl"? And you know how she gives him a tattoo in said video, which is misspelled "Galway Grill"? Yeah, apparently that was completely planned—even though Ed told fans Saoirse made a mistake while writing it.

"Ed got up on stage like two days after we did it and said I had made the mistake, and it makes me look illiterate," she told James Corden. "And I am just here to say that it was all planned, because we thought it would be funny and edgy if we misspelled 'girl,' and made it 'grill' instead."

FYI, this isn't the first time Ed has bent the truth to fans—he also concocted a story about Princess Beatrice cutting his face open with a sword that turned out to be all kindsa false. 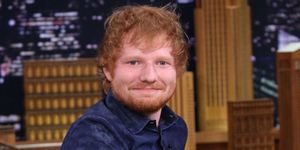 In any case, the video for "Galway Girl" is excellent, so watch below: