Royal engagements are typically on the shorter side, but there's no denying that Meghan Markle and Prince Harry's May wedding date qualifies as "whirlwind." They've given themselves barely six months to plan a massive wedding—and apparently Meghan and Harry had a good (and touching) reason for wanting to push the date forward: Prince Philip.

ET reports that Harry's close connection with his grandfather is the reason he wanted to get married ASAP—after all, Philip is 96 and recently had to retire from royal duties.

"He wanted something close to home for the Duke of Edinburgh and the Queen," royal expert Kate Nicholl tells ET. "In fact, one of the reasons that Prince Harry has wanted this wedding to happen quite quickly—this is really whirlwind by royal standards—is because his 96-year-old grandfather, the Duke of Edinburgh, is retired now and Prince Harry really wants him to be at his wedding."

She adds that Harry is "incredibly close to his grandfather" and that he "thought it was it was a great thing to [have] the wedding sooner rather than later, so his grandfather could be there, fit and healthy."

This is so sweet and touching. 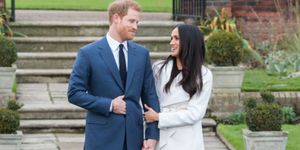 The Reason Behind Prince Harry's Odd Hand Gesture
How the Royal Engagement Interviews Differed
Mehera Bonner Contributor Mehera Bonner is a news writer who focuses on celebrities and royals.
This content is created and maintained by a third party, and imported onto this page to help users provide their email addresses. You may be able to find more information about this and similar content at piano.io
Advertisement - Continue Reading Below
More From Celebrity
Why Will & Kate Wouldn't Hang Out With Harry
What Happens on Katie's Season?
Advertisement - Continue Reading Below
Katie Holmes' Gingham Dress is Summer Perfection
Ben Affleck Had a Sweet Father's Day Celebration
Selena Talked Being Mocked Over Her Mental Health
Olivia Wilde Was Asked About Harry Styles Romance
Gigi Shared the Sweetest Photo of Zayn and Khai
Meghan Shared the Cutest Update About Archie
Meghan's Heartfelt Father's Day Gift for Harry
Sophie Turner Shared a Sweet Unseen Pregnancy Snap