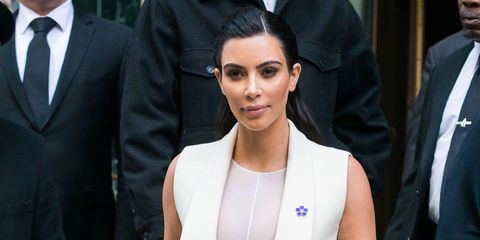 Update, 6/23: Remember when a bunch of scientists went and used their science-y powers to predict what Princess Charlotte will look like at 18? Well, someone just did the same thing to Kimye's unborn son, whom, we are delighted to inform you, almost certainly will not emerge from the womb resembling this:

The internet's consensus is young Gary Coleman, but we can make out approximately three parts Drake to two parts demon. (According to Us Weekly, forensic artist Joe Mullins was going for Kanye's nose and face shape, Kim's rosy cheeks and almond-shaped eyes, plus Kris/Khloé's eye color.) Cool, cool. May you have all those features but in better alignment, Child Who Will Not Be Named South West Because That Is the Stupidest Idea Ever.

Original post, 6/22: There's been lots of speculation as to whether North West will be getting a little sister or a little brother, but that ends now.

Kim Kardashian has announced that she and Kanye are having a boy via Instagram, where all important announcements are made:

Only the queen of social media could so effortlessly slip such a big announcement into a sweet father's day post. Bonus points for the use of the emoji family, even if that mustache dude looks nothing like Kanye.