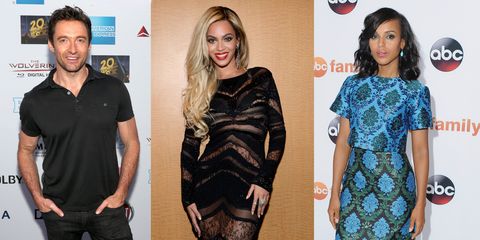 Global Citizen has announced its hosts for the 2015 Global Citizen festival: Kerry Washington, Olivia Wilde, Stephen Colbert, Hugh and Deborra-Lee Jackman, and Salma Hayek Pinault. But in case your celebrity-loving head isn't spinning yet, they're joining Beyoncé, Coldplay, Ed Sheeran, and Pearl Jam, who will be performing at the concert.

The event, which takes place September 26 in New York City's Central Park, is part of Global Citizen's effort to end worldwide poverty by 2030. This year, Chime for Change, a campaign founded by Gucci, Beyoncé, and Salma Hayek Pinault, is partnering with Global Citizen to raise awareness specifically for girls and women.

Tickets to the festival are free, with admission selectively granted to those who participate in campaign efforts listed on GlobalCitizenFestival.com.

In other words, activate the beyhive: Beyoncé is performing for a good cause, and the evening is shaping up to be spectacularly star-studded.