This is a big score for the HBO drama, who recently revealed the show would be returning for a second season after much delay from the network. Streep has earned the most Academy Award nominations ever, and was recently nominated for her latest movie, The Post. So you know it's going to be good.

The original Big Little Lies cast includes Reese Witherspoon, Laura Dern, Nicole Kidman, Zoe Kravitz, and Shailene Woodley—though there's been no confirmation yet on whether Kravitz and Woodley will definitely return for the seven-episode season. Either way, please join us in hardly containing our excitement with this insanely amazing news. 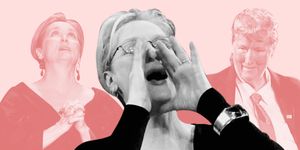 5 Things We Wouldn't Have If It Weren't for Meryl
Nicole Kidman's Huge 'Big Little Lies' Spoiler
Rachel Epstein Editor Rachel Epstein is an editor at Marie Claire, where she writes and edits culture, politics, and lifestyle stories ranging from op-eds to profiles to ambitious packages.
This content is created and maintained by a third party, and imported onto this page to help users provide their email addresses. You may be able to find more information about this and similar content at piano.io
Advertisement - Continue Reading Below
More From Celebrity
Spice Girls Reunion Tour Might Feature Posh Spice
Prince Charles' Revealing Joke About the Throne
Advertisement - Continue Reading Below
Some People Think Prince Harry Sounds American Now
Prince Charles May Make Buckingham Palace a Museum
Chrissy's Daughter Luna Is Learning to Read
The Queen Spent a Night in Hospital
Kate and Will Made Emma Watson Crack Up
Blake Lively Called Out an Instagram Account
Khloé and Tristan Have "No Label" Right Now
Kate and Will Share Intimate Moments in New Photos