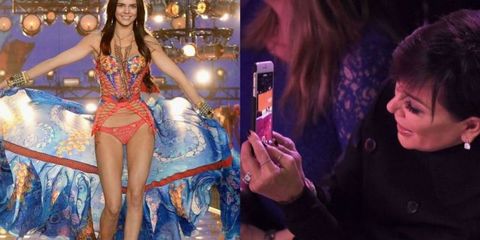 If you expected Kris Jenner to be anything less than a giddy stage mom while her daughter Kendall walkedin the Victoria's Secret Fashion Show, which aired on Tuesday, you have clearly never seen an episode of Keeping Up With the Kardashians.

Before the show aired, Kris was busy celebrating on Instagram with videos of Kendall backstage. Cameras at the event caught Kris absolutely losing it when her daughter walked out, plus she filmed the whole thing on her phone, because all moms have to do this.

Kris  went full "Regina George's mom in  Mean Girls " during the show and Twitter noticed. In a  major  way:

Kris Jenner in the crowd looking like the mom from "Mean Girls" at the talent show. #VSFashionShow pic.twitter.com/0bo2MVbWHt

I TOLD Y'ALL KRIS JENNER LOOKS LIKE REGINA GEORGE'S MAMA

As for Kendall, her reaction to mom's adorable freak out was pretty much this:

Rebecca Rose Writer I'm a writer for Cosmopolitan.com manning the fort during the night shift (because I love staying up late and hate getting up early in the morning).
Advertisement - Continue Reading Below
More From Celebrity
The British Palace Is Hiring Social Media Manager
Why Harry Always Wanted to Leave the Royal Family
Advertisement - Continue Reading Below
Sophie Turner Features in New Jonas Brothers' Vid
Chrissy Teigen Made a 'Cheer'-Inspired Video
Meghan and Harry Post an IG With a Hidden Message
Selena Gomez Just Got a Neck Tattoo
John and Emily Accidentally Snubbed Chris Martin
Blake Lively & Ryan Reynolds Took a Cozy Stroll
All Eyes on Elle Fanning
Harry Makes His First Post-Resignation Appearance