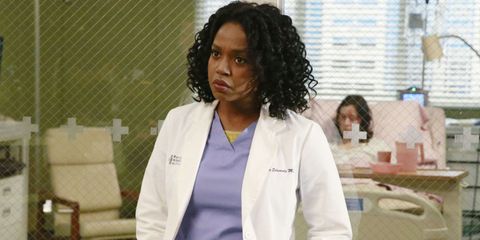 In season 12 of Grey's Anatomy, Dr. Stephanie Edwards has emerged as one of Grey-Sloane Memorial's most confident, competent residents, unafraid to stand up for herself and tackle daunting brain surgeries alongside Dr. Amelia Shepherd. But like so many of the show's dozen-plus characters, Stephanie isn't front-and-center in every episode. How does Jerrika Hinton, the actress who plays her, handle that floating in and out of big story lines? Cosmopolitan.com spoke to Hinton about what that's like as an actress, the shocking turn in Stephanie's future, and the Shonda Rhimes pilot she's about to start filming.

It feels like this is the season that everyone who was watching the show on Netflix got current.They got current, and they have decided on their ships, and they are about it.

On a show where there is so much change, in terms of both story and cast evolution, what's the thing that makes Grey's feel like Grey's, even amidst all that change?Messy humanity, maybe. That's key to Shondaland in general. Nobody is perfect, and they're all desperately trying to be the best version of themselves. There's a plot point that happens close to the end of the season, where Stephanie makes a decision that I, as an actor, as a human being [would not make]. I got on the phone with the writers a lot, and I was like, "You're really having her do this?" I'm very open to her doing things that I don't agree with, because the more ways we find to really make these characters, the better this whole thing is. But this decision … wow. I won't keep talking about it, because I think it might be coming too close to spoiler-y. But even in that decision, I see within it her attempting to be the best her that she knows how to be in that moment. That's what makes the show sing and gives it its loyal viewership.

Stephanie, like every character, has some featured episodes and some episodes where she's in the background. Is that something you know in advance — that one episode will be big and then another will be smaller — or do you not find out until you get the scripts?For the most part, we find out when we get the scripts. If you're going to be directing an episode, then they usually give you a heads up, but that's mainly Chandra [Wilson] and Kevin [McKidd]. When we have conversations with writers while they're working on breaking future scripts, they'll sometimes tip us off if we have a good storyline coming up. But a good storyline doesn't necessarily equate to being the main storyline. It just means that you've got a bit more to do than coming into a room and telling a patient they've got cancer or something terrible like that.

Is it hard to stay connected with your character when you're going back and forth between those more featured and less featured episodes?I would be lying if I said it's a breeze. But that's a part of the job, and that's also how you separate the professionals from those that aren't as professional. It's the writers' job, but mainly it's our job, to find that consistency and to maintain the integrity of the person that we're playing. It's definitely a challenge, but it's a worthwhile one. We have umpteen series regulars, and on a logistical end, that's great for people with families and things like that. The workload is spread out, so they get to have a bit of a life. And then on a creative end, the "downside" of that is exactly what we're talking about. You don't get to play the star the whole time. But I think that's OK, because that would be exhausting! I don't know how Viola Davis does it. I do not know how she does it.

I think that's why How I Get Away with Murder has shorter seasons.That must be, because good god.

So when you're doing that work to stay connected with Stephanie, what's at the core of her?I mean, they're all hardworking and they're all ambitious. But she specifically has this really strong desire to be seen for who she is. That really bubbled up in that episode where we learned about her history of sickle-cell anemia. And even in the aftermath of that, when Jo started in on that speech kind of conflating their lives, Stephanie's immediate reaction was, "I am not that, I am not to be defined by that. I am so many things, and I am so much more than that experience." And I think that's one of the things that brings her and Amelia [Shepherd] together too, because Amelia had the shadow of her brother looming over her, and she wants to be seen and break free of that.

Speaking of Amelia, in last week's episode I got a little worried, because Amelia started talking about how Penny is a natural neurosurgeon and she needs to start teaching her — which I read as a bad sign for Stephanie. Am I interpreting that correctly?You're not interpreting that … incorrectly. It is appropriate to be concerned for Stephanie, the original neuro god. But the neuro god will rise! Sure, Penny might have a natural affinity for that, but Stephanie is Stephanie, and she and Amelia have trail-blazed quite a lot of ground. That doesn't just get pushed to the side. But everyone should get to experience the magical reality of neuro.

I'm glad to hear that Stephanie's not getting elbowed out of neuro, though, because her friendship with Amelia is so essential. I'd be sad if something irreparable happened to it.Oh, I would be sad too, just because I love working with Cat [Scorsone, who plays Amelia]. There are a few times coming up where we got the episode, and as we were filming, we were like, "Oh my god, this feels like a breakup. Are we breaking up?" Our relationship feels that intimate now.

And you're also filming a Shondaland pilot! [The]I am! We're about to. I just spent the morning hanging out with my new co-star. He's new to [Los Angeles], and so I took him up to the Observatory and we hung out. And coincidentally, Bernie Sanders happened to be there at the same time, and so my co-star got to have this really strange L.A. experience of being at this landmark, and then look, there are all these people swarming this person who is, essentially, a celebrity, because that's how politics work in America, and also this person is being trailed by people with guns, because that's also how politics work in America. Welcome to California. Anyway, we shoot in a couple of weeks, and it's a completely different vibe from Grey's, because it's a half-hour, multi-cam sitcom.

The cast at the 2016 People's Choice Awards, where they won Favorite Network TV Drama.

How did you come to be involved?Shonda called me up one day, a few weeks ago, and she said that she was reading that script — [Scandal's] Scott Foley wrote it, he wrote it with Greg Grunberg — and said, "I'm reading Scott's script, and I don't know if you'd be interested in doing a comedy, but every time I read this role I think of you. If you're interested in auditioning for it…" And I said that I was flattered that she was thinking of me — like, that's amazing, thank you so much — and I said of course I'd be interested in auditioning for a comedy. Some people were saying, "Why don't they just offer it to you?" Well, because it might not be mine. Just because I live in Shondaland doesn't mean I automatically get gifted these things. And expecting that sounds like a horrible way to approach this business. I'm flattered that she thought of me. That makes me feel seen. The fact that the call even happened feels like a win. So now it's just trying to stay calm and not get nervous, even though I'm attached to the possibility. It's a ridiculous life right now … it feels like living the lottery, because four years of Shondaland and now maybe this new show came from doing one scene on Scandal. I could not have concocted a story like that.