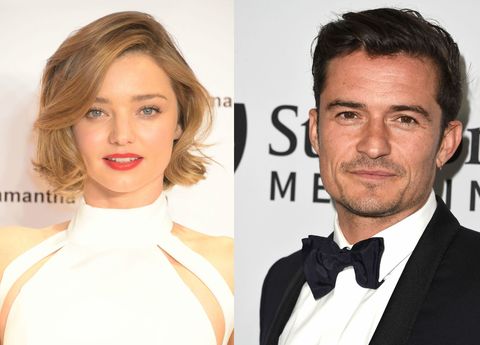 Coachella is officially here and that means all the celebrities are out mixing together in the California desert. Even those who may not want to run into each other, like exes Miranda Kerr and Orlando Bloom.

The two were spotted hanging around the festival grounds with their new beaus: Kerr with Snapchat founder Evan Spiegel and Bloom with Katy Perry.

Each pair seemed to be enjoying themselves and not worrying too much about possibly running into their former flame. The Australian model was all smiles while hand-in-hand with her tech-boss boyfriend. Spiegel looked like he was going more incognito with a black bandana covering his face. Hiding from Bloom perhaps? He did supposedly punch out Justin Bieber over Kerr that one time…

On the other hand, Perry wore a funky metallic hair wrap and cat-eye sunglasses while Bloom wore a bright red Hawaiian shirt — two looks sure to catch people's attention. According to US Weekly, festival attendees easily spotted the pair and even say they were making out in plain sight. Ah, new love!