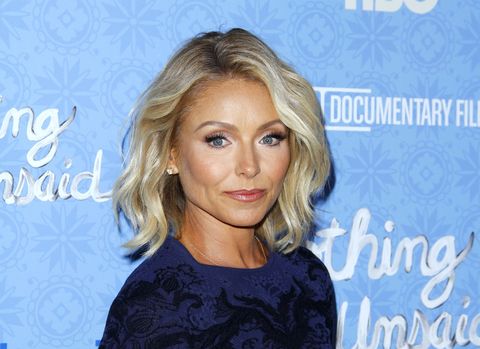 There are a lot of rumors swirling about the behind-the-scenes drama going on at Live with Kelly and Michael. Kelly Ripa has been MIA from the ABC talk show since it was announced that her co-host of four years Michael Strahan is jumping ship to another show on the network: Good Morning America.

Wednesday, Ana Gasteyer filled in and today it was Erin Andrews. Strahan and Andrews made no mention of Ripa's buzzed-about absence. A show spokesperson tells Redbookmag.com Andrews will be back again tomorrow to fill in for Ripa and Pretty Little Liars star Shay Mitchell will guest co-host Monday.

So excited to be co-hosting @KellyandMichael this coming Monday! Don't forget to tune in 😊

The rep tells us, "Kelly Ripa will be out on Friday and Monday for a previously scheduled vacation." And a source confirms to Redbookmag.com that Ripa is expected back on Tuesday.

According to People, that vacation is a 20th anniversary trip to Turks and Caicos with her husband, Mark Consuelos. She was spotted smiling by a photographer with Consuelos in Manhattan today.

While she looks perfectly calm and collected in the snap, gossip sites are saying Ripa has been seething about the way ABC handled Strahan's departure. Sources told the New York Post gossip column Page Six : "There's been a total Ripa meltdown,"and "Kelly sees this as the ultimate betrayal." Another source added: "She didn't show up for work and isn't taking anyone's calls."

Ripa reportedly didn't know she was losing her co-host until right after they taped the show Tuesday. Less than an hour later, the news broke in the media.

The New York Times reports that Ripa has long been worried about Strahan's guest-hosting gig at GMA distracting him from their show. For the past two years, he's been a correspondent on GMA a couple of days a week. When Ripa was called into talk with the show's producer Michael Gelman and other execs Tuesday to learn about Strahan's departure, she reportedly said: "Didn't I tell you this was going to happen? I told you two years ago this was going to happen." According to the report, she was upset that GMA was being given priority over Live.

Other celebs have started taking sides. Oprah Winfrey told Entertainment Tonight: "Nobody should ever be blindsided. I don't know who's in charge, but somebody should've said, 'This is gonna happen.' You shouldn't have to read it in the paper. Ever." And Ripa's BFF Andy Cohen Instagrammed this shot of the pair captioned #MorningQueen:

Ripa's fans showed their support in the comments saying "Kelly, you got blindsided. Team Kelly!"

Strahan isn't scheduled to start at GMA until September, so unless things get smoothed over, it's going to be a long summer.