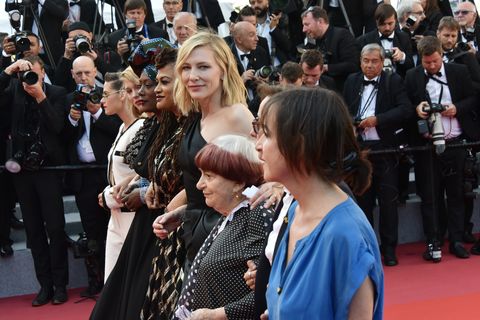 On Saturday, 82 women in film stood together on the steps of the Cannes Film Festival to protest inequality in the film industry and at Cannes in particular. Cate Blanchett, Ava DuVernay, Kristen Stewart, and Salma Hayek were among the stars who took part in the symbolic demonstration.

"Today, 82 of our sisters gathered on the steps of the @festivaldecannes to symbolize the number of women who have been featured in the festival's competition over its 71-year history," #TimesUp wrote on Instagram. "We are proud to be a part of this action with @5050x2020. #TIMESUP."

The protest was in partnership with 50/50 x 2020, a group working for equal gender representation in the film industry by 2020.

"Women are NOT a minority in the world, yet the current state of our industry says otherwise," 50/50 x 2020 wrote in a statement on the protest. "As women, we all face our own unique challenges, but we stand together on these stairs today as a symbol of our determination and commitment to progress. We are writers, producers, directors, actresses, cinematographers, talent agents, editors, distributors, sales agents and all involved in the cinematic arts."

Kayleigh Roberts Contributor Kayleigh Roberts is the weekend editor at Marie Claire, covering celebrity and entertainment news, from actual royals like Kate Middleton and Meghan Markle to Hollywood royalty, like Katie Holmes and Chrissy Teigen.
This content is created and maintained by a third party, and imported onto this page to help users provide their email addresses. You may be able to find more information about this and similar content at piano.io
Advertisement - Continue Reading Below
More From Celebrity
Prince George's Favorite Meal Is Very Grown-Up
Selena Felt "Bullied" by SBTB's Kidney Jokes
Advertisement - Continue Reading Below
The Queen and Philip Are Breaking Royal Tradition
Harry Said Becoming a Father Changed "Everything"
This Ellen and Justin Interview Is Very Awkward
Umbrella Academy's Elliot Page Comes Out as Trans
Princess Diana's Butler Talks 'The Crown'
J.Lo Twins with Her Mom in Sweet Holiday Selfie
Kate Rewore a Dress With a Sentimental History
Chrissy Took Her First Shower Since Losing Jack