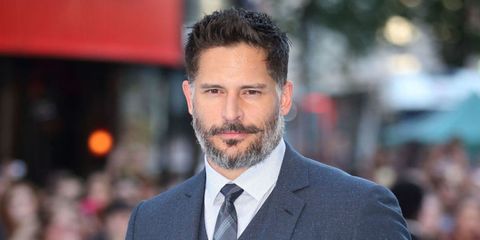 Usually, I would make fun of someone for posting a TBT on a Wednesday, especially if it happens around dinnertime, but all is forgiven because (1) this is Joe Manganiello, (2) this is Joe Manganiello from 20 years ago, and (3) I actually don't have Joe's contact information. Folks, if you ever had a thing for a little fuzz under the chin or bleach-blond hair, this Joe's for you:

Throw Back Thursday to 1996...#TBT pic.twitter.com/QeiiQSDuQh

As you can see, Joe's eyebrows were already fire in 1996, when he was in his late teens (ie, he had just graduated high school). Anyway, when fans began comparing him to Eminem, Joe said he "had Em by a year with the blonde" and if anything, looked more like Dennis Rodman, whose hair has been all the colors of the rainbow. Joe then went on to live-tweet game two of the Stanley Cup Finals. His wife Sofia Vergara made a brief appearance.