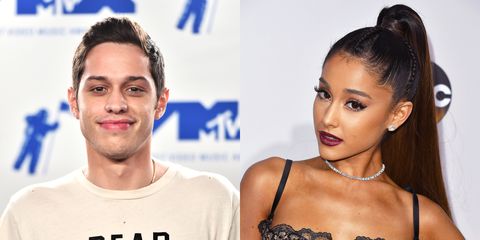 Ariana Grande and Pete Davidson are reportedly engaged, a few weeks after their relationship was first reported, People confirms. However, the singer and Saturday Night Live comedian have yet to address the news.

"It’s a recent engagement. They’re just two people who found love quickly and make each other happy all the time. They both started talking about it this past weekend. It’s nothing they’ve been hiding," a source close to the couple told the site.

"They are a perfect fit," a source told Us Weekly. But don't expect the couple to tie the knot right away. "They are not rushing to get married," the insider added. "Their friends are really excited and supportive."

Apparently, the couple was already spilling the news over the weekend, according to another source. They "were telling people that they’re engaged" at Robert Pattinson's birthday party on Saturday, the insider told Us.

Grande and Davidson were first reported to be dating on May 21. However, a source told E! News that their relationship "just started and is casual" at the time. Since their romance went public, it didn't take long for the the couple to go Instagram official.

Davidson, 24, shared a photo with Grande, 24, in matching Harry Potter robes with the caption, "the chamber of secrets has been opened ..."

Then Grande shared a photo with Davidson hugging her and kissing the top of her head on May 31. She captioned the photo, "i thought u into my life 💭 woah ! look at my mind 💡⚡️🙈."

And soon after, another photo followed, where Grande joked that her Instagram page was turning into a "Pete Davidson fan account."

Most recently, the duo was spotted at Kanye West and Kid Cudi's listening party together, which they also documented on Instagram. "Feel the love," Davidson captioned a sweet but blurry pic.

The new pair just got out of long-term relationships. Last month, it was reported that Grande parted ways with rapper Mac Miller after two years of dating. However, their "relationship had been over long before" they appeared at Coachella together in April, a source told E!.

Also last month, Davidson confirmed his breakup from Cazzie David, Larry David's daughter, after two years together. He appeared to have deleted pictures with her from his Instagram.

Erica Gonzales Erica Gonzales is the Culture and Content Strategy Editor for BAZAAR.com, where she oversees news and culture coverage, including celebrity, music, TV, movies, and more.
Advertisement - Continue Reading Below
More From Celebrity
The Most Iconic Weddings Throughout History
Harry Feels "Overwhelming" Guilt Away From Family
Advertisement - Continue Reading Below
Meghan's Son Archie Loves Doing FaceTime Playdates
Cody Embarrassed Miley By Reading Her a Love Poem
Kendall Said Kourtney's Breakup Damaged Her
Ryan Reynolds' Response to an IG Fitness Challenge
Rare Photos of Queen Elizabeth Through the Years
Meghan Might Have to Sponsor Harry's Visa
Philip & The Queen Reunite After 2 Years Apart
How Meghan Markle's Son Archie Is Doing in LA