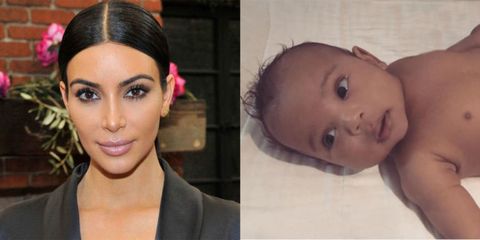 Before rapping along to Kanye and singing J.Lo happy birthday, the media mogul (that's legit what she is—a media mogul) talked to E! News about a few interesting tidbits, including her excitement over Rob Kardashian and fiancée Blac Chyna's soon-to-be baby.

"They have talked to me about names but I would never tell because that's really personal to them. If they want to share that, they could," Kim said about naming the first born to a Male Kardashian. "But we're just there to support them. We're so excited that we're getting a new cousin."

"I was FaceTiming with Chyna the other day and explaining to North that there was a baby in her belly and then sharing the sonogram pictures with North and explaining to her that this is her little cousin and it's so exciting we have a new cousin coming," she added. At that point, North probably pushed away whatever camera was currently shoved into her face and then said something adorable and fell asleep. (I write the world's most boring North West fanfic.)

She also opened up about Saint's first words, which she's not particularly fond of.

That's adorable! Also, it's making me feel competitive about getting a shout out from my (non-existent) child before my husband does. Game on!

And that's all folks. If you're coming here looking for Kim's latest comment on the Taylor Swift situation, you're gonna have to look elsewhere.

Laura Beck Laura Beck is a Los Angeles-based TV writer and frequent contributor to Cosmopolitan.com — her work has appeared in the New York Times, New Yorker, Jezebel, and the Village Voice.
This content is created and maintained by a third party, and imported onto this page to help users provide their email addresses. You may be able to find more information about this and similar content at piano.io
Advertisement - Continue Reading Below
More From Celebrity
Harry Carries Briefcase That Reads "Archie's Papa"
Meghan Markle and Prince Harry Arrive in NYC
Advertisement - Continue Reading Below
Kate Middleton Looked Radiant in Cream
People Are Convinced Kylie Is Having a Boy
Kim Kardashian's Met Gala Ponytail Cost $10K
Megan Fox and Kourtney Posed for Sexy Skims Pics
Britney Spears Dedicated a Message to Her Sons
Meghan's Face "Lights Up" When Harry Walks In
Kate Middleton, Millennial, Wore Skinny Jeans
'Sex and the City' Star Willie Garson Dies Age 57