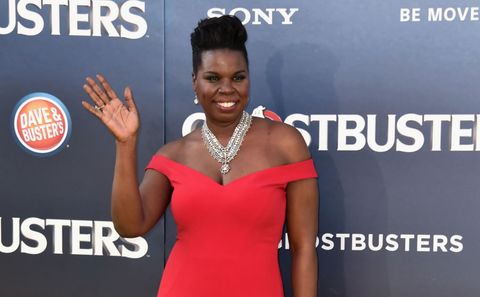 Leslie Jones, actress, comedian, and Team USA super-fan, has been live-tweeting the 2016 Olympics and it's actually the best. Jones isn't just a casual fan of the Olympics. She doesn't just follow the results online and tune in for the big events. She's a certified fangirl who has been watching the games religiously and live-tweeting her on-point reactions to everything that happens.

The Ghostbusters star's tweets have been getting a lot of attention, including some from Jim Bell, the executive producer of the NBC Olympics. Bell took notice of Jones's beyond-enthusiastic tweets and invited her to Rio. For real.

Jones's replied (of course) to make sure Bell wasn't kidding. He wasn't.

We have to stay tuned to see if Jones actually makes the trip to Rio to support Team USA in person, but we definitely hope she does. In the meantime, check out a few highlights from Jones's Olympics tweets so far and follow her on Twitter for ongoing, hilarious coverage of the games.