When I found out that Karlie Kloss has been dating Joshua Kushner—yes, brother of Senior Advisor to the President of the United States Jared Kushner—for over six years (and just got engaged!), I had a lot of questions.

First, how do they keep their romantic life so private? (Answer: Karlie apparently hates talking about it, and they only post occasional highlights of their relationship on social media.) Does her fiancé share the same views as his brother and sister-in-law Ivanka Trump? (Answer: He doesn't. He openly labels himself as a Democrat.) Is Karlie forced to have uncomfortable dinners with Ivanka, who pretends to support women? (Answer: Unclear, but she did attend the U.S. Open with her in 2016.)

To answer these Very Important Questions, I decided to take a look back at Karlie and Josh's relationship that began in 2012. It was a great time—the country re-elected Barack Obama for a second term in office and the idea of Donald Trump stepping foot in the White House was unimaginable. (I'm sure Karlie never thought she'd have a personal connection to the president, either.) Let's reflect on Josh and Karlie's sweet, love-filled journey, below.

Karlie and Josh dating rumors begin to surface after Karlie brings him as her date to the 2012 Victoria's Secret Fashion Show after-party. Josh apparently “seemed nervous and shy around everyone, but handled it well."

They officially met on June 8, noted by Karlie herself on their four-year anniversary. She posted an adorable picture on Instagram kissing Josh's cheek with the caption, "Four years ago today I met my best friend [star and moon emoji] I love you more everyday."

No word on how or where exactly they met.

four years ago today I met my best friend ⭐️🌙 I love you more everyday.

Josh and Karlie go on one of their first trips together to Coachella. CEO and Founder of Instagram Kevin Systrom also posted a picture of the couple out in the desert. (FYI, Josh was one of the first and youngest people to invest in Instagram.)

There's not much going on publicly with the couple other than this very artsy photo that Josh posted on his Instagram of Karlie at the MoMa.

A very young Karlie, 21, and Josh, 28, make one of their first public appearances together and attend the WSJ. Magazine 2013 Innovator Awards in NYC.

Karlie and Josh head to the U.S. Open and Josh stares into a paparazzo's soul.

Karlie gets cute on Instagram and posts a picture of herself kissing Josh with the sun perfectly hitting their faces (well, mainly covering Josh's face, but you know).

Still going strong. Josh posts an Instagram of Karlie while they're on vacation.

A few weeks later, they grocery shop together—as normal couples do. Karlie looks unamused and Josh is staring into the soul of the paparazzi once again.

Summer lovin'. Josh, the artsy Kushner brother, takes a picture of Karlie with a beautiful sky and moon in the background for her birthday.

The artistry continues a month later. Josh is now officially an Instagram boyfriend.

Karlie and Josh get a little fancier and enjoy the 2016 Time 100 Gala together. Karlie wore purple to honor Prince after his death that occurred the same month.

The pair attend the 2016 Met Gala. Karlie is wearing a white cut-out Brandon Maxwell dress. Here, we see the evolution of their night in three photos, which has never been more relatable.

No, it's not all perfect. The couple have a visible argument in the middle of the street. Spoiler alert: they set aside their issues. We're only halfway through this timeline, don't worry.

It's unconfirmed as to why Josh didn't accompany Karlie to a wedding in France, but she had an even better date: Princess Beatrice.

Earlier this month, she also attended the U.S. Open with Kushner, his brother, and his sister-in-law, Ivanka Trump.

Fans thought the couple were engaged after going on their fifth year of dating, but Karlie's rep immediately shut down the rumors.

Karlie talks about her relationship in a rare interview with InStyle. "You make it work. We’ve been together almost five years," she says. "Time flies. It’s crazy. He’s a super-solid dude." Super solid, indeed.

Karlie celebrates Josh's 32nd birthday by posting a sweet Instagram quoting a poem by Atticus and saying their relationship has included "the best memories of my life."

"My atoms love your atoms, It's chemistry. - @atticuspoetry ❤️🤓🎂🍪❤️ Happy birthday to my best friend and partner in crime. The past 5 years of our adventures together have been some of the best memories of my life. I love you @joshuakushner."

My atoms love your atoms, It's chemistry. - @atticuspoetry ❤️🤓🎂🍪❤️ Happy birthday to my best friend and partner in crime. The past 5 years of our adventures together have been some of the best memories of my life. I love you @joshuakushner

In what's (clearly) a lack of support for Donald Trump, Josh and Karlie attend the March for Our Lives in Washington, D.C. Josh reportedly donated $50,000 to the student-led protest created by Marjory Stoneman Douglas students after 17 students and faculty were killed by an AR-15 in Parkland, Florida.

On a lighter note, Karlie calls Josh her "ride or die" as they pose together in an ATV in the middle of the Wadi Rum Desert in Jordan. Same.

My ride or die ❤️

They also made a stop in Israel, and were joined on their trip by celebs like Ellie Goulding, Misha Nonoo, and Princess Beatrice.

During this time period, Porter published an interview with Karlie, who was on the cover of its April 2018 issue, where she finally opened up about why she's so private about her relationship.

"It's not like I've ever wanted to be so secretive about my private life. Carolina Herrera always says, 'A woman who's an open book is boring. There's no mystery anymore,'" she says. "I know in my life what really matters to me. I'm not trying to hide that from the world; I just really like having a more private private life. I've got nothing to hide, though!"

Karlie and Josh attend the Versace Met Gala after-party. The theme of the night was "Heavenly Bodies: Fashion and the Catholic Imagination."

Karlie and Josh were spotted holding hands again in NYC. A week later, they celebrated his birthday together for another year. "Happy Birthday to my love + my best friend in the Universe. Love you more than I can ever express @joshuakushner," she wrote followed by a red heart emoji.

Happy Birthday to my love + my best friend in the Universe. Love you more than I can ever express @joshuakushner ❤️

In the same month, they also did some traveling to Japan.

A week later, Karlie faced some backlash from fans in regards to her personal connection to the Trump administration after she tweeted about the immigrant children being kidnapped at the border.

"Politicizing the lives of these defenseless children is heartless. We have to be the voices for these kids, and I support anyone standing up to do right by them.
Call your congressperson RIGHT NOW and support the bill, US - S 3036. Speak up. #KeepFamiliesTogether," she tweeted.

Politicizing the lives of these defenseless children is heartless. We have to be the voices for these kids, and I support anyone standing up to do right by them.
Call your congressperson RIGHT NOW and support the bill, US - S 3036. Speak up. #KeepFamiliesTogether pic.twitter.com/v8UeNz3zBB

One Twitter user responded, "You pick your phone! You're closer to ending this nightmare than most of us #calljared #callivanka."

You pick your phone! You're closer to ending this nightmare than most of us #calljared #callivanka

Welcome to present day! Karlie and Josh's relationship is still alive and well, considering they just got engaged. Karlie made it Instagram official, and Josh did the same. Karlie may have to convert to Judaism, per the request of Josh's parents, but nothing is confirmed.

I love you more than I have words to express. Josh, you’re my best friend and my soulmate. I can’t wait for forever together. Yes a million times over 💍

Cheers to another six years of art, traveling, and resisting your boyfriend's brother's father-in-law's administration. 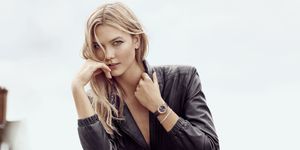