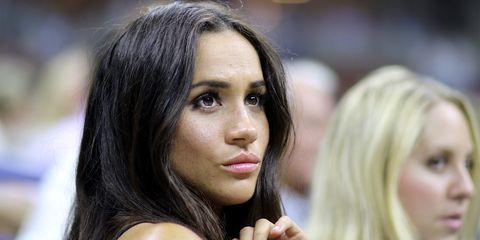 Another day, another Thomas Markle-related royal family drama. After months of bad-mouthing Meghan and her new in-laws in the press in a series of tell-all interviews (not to mention being at the center of embarrassing paparazzi scandals and missing the royal wedding), Thomas is reportedly ready to play nice and make up.

Related Story
Meghan Markle's Dad Lashes Out at the Queen

You know, if Harry and Meghan will have it. Which is not guaranteed by any means.

According to The Daily Mail, Thomas, who is 74, hopes to apologize to and reconnect with Harry and Meghan during their planned trip to the United States in 2019. According to the publication, Thomas is "desperate" for his final years to be happy with his daughter and son-in-law.

A friend of Thomas' reportedly told the Sunday Express, "He wants to hug his daughter and tell her how very proud he is of her and how much he loves her."

This sounds great, but Thomas' history of slamming Meghan and the rest of the royals in interviews doesn't exactly back it up.

"He hates that the world perceives him and some of Meghan's other relates as 'trailer trash' folk trying to cash in on her happiness," the friend said. "But all he really cares about is letting her know how much he loves her and reopening the door that has slammed shut between them."

To recap, Thomas Markle has admitted to staging paparazzi photos and then lying about it to Prince Harry (before hanging up on him, no less), given numerous tell-all interviews, said Meghan looks "terrified" by her new life, compared the royal family to a cult, and, along with all of that, slammed her for not wanting to talk to him.

So, you know, it would make sense if Meghan had totally locked that door and thrown away the key.

This content is imported from {embed-name}. You may be able to find the same content in another format, or you may be able to find more information, at their web site.
Kayleigh Roberts Contributor Kayleigh Roberts is the weekend editor at Marie Claire, covering celebrity and entertainment news, from actual royals like Kate Middleton and Meghan Markle to Hollywood royalty, like Katie Holmes and Chrissy Teigen.
This content is created and maintained by a third party, and imported onto this page to help users provide their email addresses. You may be able to find more information about this and similar content at piano.io
Advertisement - Continue Reading Below
More From The Ultimate Guide to the Royal Family
The Queen Has a Collection of Dog Toys for Sale
Meghan Revealed the Nod to Diana in 'The Bench'
Advertisement - Continue Reading Below
Will Spent Father's Day with George and Charlotte
Charles Won't Allow Archie to Become a Prince
Prince Charles Cant Deal with Harry's Criticisms
Meghan and Diana Had Similar Issues with the Queen
The Queen Insisted on Cutting a Cake with a Sword
Harry Texted Kate, Not Will, When Lili Was Born
Kate's Kids Want Her to Stop Taking Their Pictures
Kate Wore a Pearl Bracelet That Used to Be Diana's