Today's Top Stories
1
Can Tayshia Adams Steal You For a Sec?
2
People Have a Lot of Feelings About 'I Care a Lot'
3
Watch Prince Harry's Interview with James Corden
4
Found: All-Natural Makeup Brands That Deliver
5
The Founder Who Got Meghan Markle to Invest
ABC

Can someone please call a doctor? Because the new trailer for Grey's Anatomy's 15th season is out, and I have a fever, and the only cure is Jesse Williams.

In the trailer for the show's new season, our favorite doctors from Grey Sloan Memorial (a.k.a. Seattle Grace Mercy West Hospital, once also known as just Seattle Grace Hospital) are battling it out for a new position. But it won't be easy, because there are new hunky doctors deeming themselves "Ortho-god" (Luke from The OC, hel-LO); Kim Raver returns as Dr. Teddy Altman with her own pregnancy drama; and there's a new love interest for Meredith (Ellen Pompeo).

Did that ending love scene make it hot in here for anyone else, or is it just me?

The series continues to surprise and shock, even after 15 seasons and over 300 episodes, and this newest chapter, there doesn't seem to be any changes afoot. With its fifteenth season, Grey's Anatomy has become ABC's current longest-running scripted running series and second-longest scripted primetime ABC series ever, as well as the second-longest primetime medical drama on television, coming in second to ER.

Take a look at the trailer for the show's 15 season below, and get excited for the series' return with a two-hour premiere September 27 at 8:00 p.m. 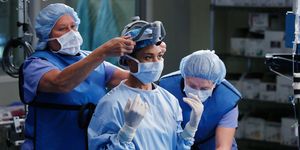 50 Things You Never Knew About 'Grey's Anatomy'
34 Celebrity Cameos from 'Grey's Anatomy'
Amanda Mitchell Amanda Mitchell is a writer, podcaster, and a walking, talking exclamation point.
This content is created and maintained by a third party, and imported onto this page to help users provide their email addresses. You may be able to find more information about this and similar content at piano.io
Advertisement - Continue Reading Below
More From Celebrity
Your Guide to the Current Royal Line of Succession
Watch Prince Harry's Interview with James Corden
Advertisement - Continue Reading Below
Meghan Has an Adorable Nickname for Harry
Harry Revealed Archie's Impressive First Word
Harry Said the Press Was Ruining His Mental Health
Here's Blue Modeling Icy Park Like a Pro
How Kate and Will Feel About the Sussex Oprah Chat
Selena Gomez Photographed Flipping Off Paparazzi
Serena Williams Stuns in a Glamorous Red Robe
Sophie Turner and Joe Jonas Took the Cutest Selfie