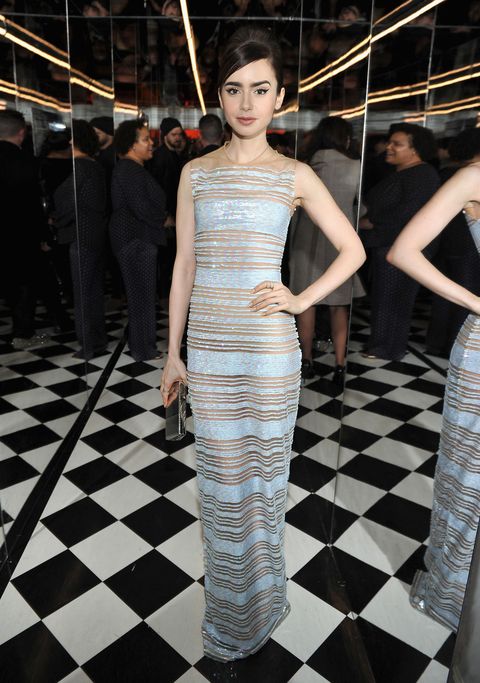 Lily Collins has spoken for the first time about her past struggle with anorexia, and how it helped her take on her challenging new role in drama To the Bone.

The 27-year-old British-born actress plays a young women seeking help at a treatment center in a final bid to conquer her severe eating disorder. It's the directorial debut of Buffy the Vampire Slayer writer Marti Noxon; Noxon wrote it from her own experience of anorexia.

At #Sundance, @lilycollins explained how her past struggles with an eating disorder helped to inform her "To the Bone" character pic.twitter.com/OoI85KMfHW

"Marti [Noxon] was so nurturing right away to reference my experiences," Collins revealed to Variety during a press conference at the 2017 Sundance Film Festival.

"In a way I'm playing a part of Marti's life, so we talked about her experiences and we shared a lot," Collins continued. "And we spoke to doctors about the facts, and visited groups of young women and heard their stories."

Noxon—who also took part in the interview, along with Collins' co-star Carrie Preston —immediately interjected: "That's funny, because I knew [about Lily's eating disorder] and I didn't know if i was allowed to say it..."

"Well it's the first time I've talked about it," Collins admitted, "this is my moment of talking about it."

"It's important, and something a lot of young women go through. There's no shame in it and it's about embracing your past, and that it doesn't define you. And surrounding yourself with people that support you, and about surviving and getting through it."

"It doesn't define you."

The 27-year-old was recently nominated for a Best Actress Golden Globe for her role in romantic drama Rules Don't Apply.

To the Bone will be released in the UK later this month.