Ben Affleck and Jennifer Garner are giving their marriage another shot, sources close to the couple tell People. 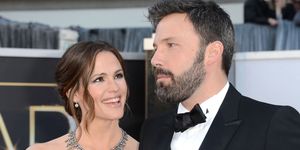 "Jen has called off the divorce," a source close to Garner told the magazine. "She really wants to work things out with Ben. They are giving things another try."

The pair have been separated since June 2015, following reports that Affleck had an affair with their children's nanny. (Garner told Vanity Fair last year that the nanny "had nothing to do with our decision to divorce.") Affleck and Garner had been married for 10 years.

But since news of the split, the couple has been spotted together with their three kids, Violet, 11, Seraphina, 8, and Samuel, 5. Just a couple of weeks ago, they hosted a birthday party for their son.

According to the People report, both Affleck and Garner are eager for a reconciliation.

"There is always a chance of reconciliation. They love each other," the source said. "They also really, really love their kids, and those kids love their parents."

Kate Storey Esquire Writer-at-Large Kate Storey is a Writer-at-Large for Esquire covering culture, politics, and style.
This content is created and maintained by a third party, and imported onto this page to help users provide their email addresses. You may be able to find more information about this and similar content at piano.io
Advertisement - Continue Reading Below
More From Celebrity
Sophie Shared a Stealth Selfie on Instagram Story
Meghan and Diana Had Similar Issues with the Queen
Advertisement - Continue Reading Below
The Queen Insisted on Cutting a Cake with a Sword
Harry Texted Kate, Not Will, When Lili Was Born
Kate's Kids Want Her to Stop Taking Their Pictures
SJP Posted Pics from the 'SATC' Revival Table Read
Kate Wore a Pearl Bracelet That Used to Be Diana's
Harry's HRH Title Was Removed from a Diana Display
Harry and Meghan Are Trying to Keep the Peace
Olympia Wore a Mini Version of Serena's Unitard