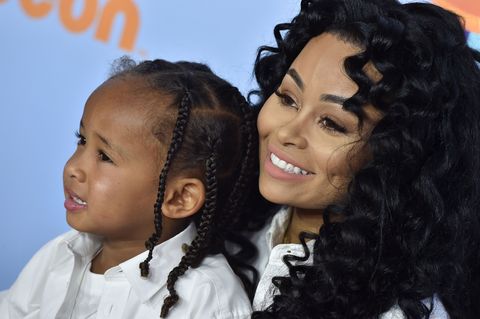 While you were dreaming about this photo of Ryan Gosling and Jon Hamm early Tuesday morning, Blac Chyna went on Snapchat to make some very serious claims about her ex Tyga.

According to Chyna, Tyga has not been paying child support for their 4-year-old son King. Chyna, who gave birth to daughter Dream four months ago, made several other claims in her Snapchat reveal, including the size of her bank account ("I got more money then [sic] ur account Tyga"), Tyga's alleged infidelity, and her current nickname for her ex ("Tyga ur a bitch"). She also called Tyga by his legal first name, "Michael," and mentioned a "Terrell" and "Heather."

Tyga has had a string of financial problems in recent years, including a dispute with a former landlord over a rental property in Malibu. In 2016, an arrest warrant was issued for Tyga after he allegedly failed to pay more than $400,000 in damages and rent. Remember, this is the same person who keeps stacks of $100 bills in his fish tank, as shown on Tyga's Snapchat last summer.

Before signing off on Snapchat Tuesday morning, Chyna also posted an address in Encino, along with the words "On wait." Turns out, the address is of her Lashed bar, which might mean that she's invited Tyga over to discuss child support, since I'm pretty sure Tyga is not an expert when it comes to liquid lipstick colors.

Either way, Twitter has reacted in its usual, adorable way to the Snapchat drag. Here, a healthy sample: