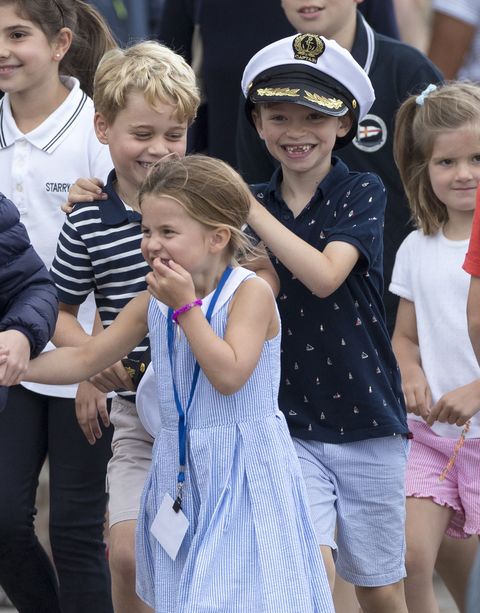 As some of the youngest members of the British royal family, Prince George and Princess Charlotte are growing up in the global spotlight.

And according to a new report in People, royal siblings Prince George and Princess Charlotte have very difference personalities and mannerisms. An insider allegedly told the publication, "George is more reserved, and Charlotte is more outgoing." Musing as to why this might be, the insider said, "Maybe it’s because he’s the heir and one day he might be king."

The source also speculated that George and Charlotte's dynamic is similar to William and Harry's. While William has been preparing to one day be king, Harry has not been burdened with the same responsibility. George is currently third in line to the throne, meaning that it will be his duty to become king after his father.

The insider explained, "It’s the same difference between William and Harry." They continued, "Harry is much more laid-back and William is the more serious one because he will be king one day."

A previous People report also revealed that George and his sister "spend so much time together," particularly as "Playdates [with outsiders] can be tricky, so they learn to lean on each other."

Amy Mackelden Weekend Editor Amy Mackelden is the Weekend Editor at HarpersBAZAAR.com, where she writes about entertainment, celebrity news, beauty, and fashion.
This content is created and maintained by a third party, and imported onto this page to help users provide their email addresses. You may be able to find more information about this and similar content at piano.io
Advertisement - Continue Reading Below
More From The Ultimate Guide to the Royal Family
The Queen Fired a Nanny Who Tried to Overrule Her
Harry & Meghan Want to Go Back to the UK This Year
Advertisement - Continue Reading Below
The Queen Is Apparently an Anti-Foodie
Harry Looked Regretful During Time 100 Interview
The Queen's Dining Room Has a Secret Button
Meghan Could "Seriously Consider" Running for Prez
The Palace Just Subtly Shaded Prince Harry
Harry Plans to Fly Archie Around in a Helicopter
Harry & Meghan's Speaking Demands Could Cost Them
Will & Kate Skipped Harry's Birthday Zoom Call