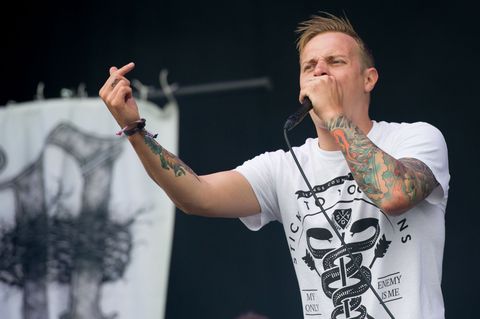 People go to gigs to enjoy the music; they don't go to gigs with the expectation of being violated by another concert-goer. But unfortunately, that's what happened to one woman who attended a recent Architects performance at the Lowlands Festival near Amsterdam.

During one of the songs, Architects lead singer Sam Carter noticed a woman crowd-surfing near the front. But following the woman's journey towards the stage, Sam noticed a man in the audience take complete advantage of her by groping her boob while she was in no position to prevent him from doing so, and he was outraged.

In a video which has been posted on Twitter, the lead singer can be seen stopping the gig to say: "I've been going over in my f*cking mind about whether I should say something or not about what I just saw in that last song. And, do you know what, I am going to say it."

Deciding to speak out against the sexual harassment he'd witnessed, Sam said: "I saw a girl, a woman, crowd-surfing over here. I'm not going to point out who but I saw you grab at her boob."

Here's hoping it'll stop him—and anyone else—from ever carrying out any kind of degrading behavior like that again.