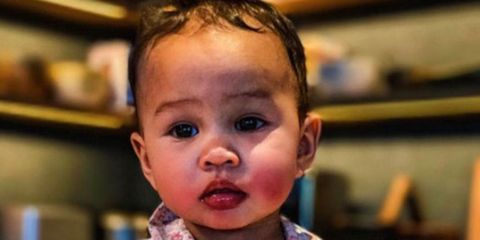 Fact: It's only been eight months but we've officially crowned John Legend, Chrissy Teigen, and Luna the cutest family of all time. Take a look at some of the cutest photos of their Baby Lu.

Is this team taking walk-ons? We would very much like to join.

We would love to think that this is Baby Luna's very first singing lesson ♫.

Have you ever seen a stoop look this good? Chrissy calls Baby Lu her "stoop buddy" in this adorable mother-daughter photo-op.

Chrissy Teigen wrote this message to Luna to celebrate her very first birthday:

"Happy first birthday Lu!!!! My lovebug. You are all the best parts of the both of us and I cannot believe how much has happened in you first 12 months of life. We love you to the luna and back. Thank you @Yopeteryang for taking these awesome photos and the lip sync battle team for such a nice surprise!!! ❤️❤️❤️"

What we would do to be that Easter Bunny right now...

Those curls! Those cheeks! Luna looks more like her famous parents than ever in this Instagram posted by Chrissy Teigen.

John wasn't amused when Chrissy and Luna visited Santa without him, but they made sure to include him—in a slightly different way. "When your husband is in Paris but you gotta get your Santa on,"tweeted Chrissy with John replying "Savage."

Chrissy captured an adorable shot of John and Baby Luna probably getting ready for a fantasy battle—straight up LARP-style.

In a screen grab from John's new video "Love Me Now," John and Chrissy give Baby Luna extra love.

Chrissy and Baby Luna stare in awe as the crooner sings the heartfelt song to of the most important people in his life.

Expressing his reaction to the election results, John wrote on Instagram:

"It's been quite a time for the United States and the rest of the world as we all watched the election results come in early Wednesday morning. Some of us wept for our country. Some of us celebrated. Some of us are already taking to the streets in protest. You all know how I wanted and expected the election to go. I wanted us to choose unity and inclusion over building walls and singling out ethnic and religious groups for hate and suspicion. I wanted us to choose progress over yearning for some long-lost mythical era when America was supposedly greatest. I wanted us to destroy the highest glass ceiling instead of electing an admitted sexual assaulter. But we did not. These are the election results and all of us will have to learn to deal with it. I will not give up though. I will continue to be aware and vigilant. I will continue to speak out for justice. We didn't think about the election when we planned the release date for this song and video. But in this time of conflict and uncertainty, it's clear that we all need more love. I find it in my family and in my music. Embracing my family has made today full of love and light despite the bad news. But it's also important that we show love and empathy to people who may not look like us or live like us. Those who are marginalized and rejected, feared and left behind. The video premieres Friday and features a diverse group of people from all over the world. From Standing Rock to Iraq, from Orlando to the DR. Love is universal. We all need it. We all can give it. And it will ultimately win over hate. I have to believe that.

If you want to join in our celebration of love, use the hashtag #lovemenow and send us a picture of you and someone you care about."

Knowing that Halloween costume shopping can be as agonizing as ever, Chrissy turned to Instagram for guidance and to document her frustration at the super adorable options.

"Option #1: Baby Luna looks so adorable in this Hawaiian costume. We approve, but let's see what else she got!"

"Option #2: I mean can Disney just base a princess off Baby Luna because she's just too cute in this Belle costume!"

"Option #3: This costume is…BANANAS (excuse my really bad jokes, but I had to)"

"Option #5: Oh my gosh. Those cheeks in that hot dog suit. Okay we're sold, but let's see what else they have."

"Option #6: Minnie Mouse is such a classic and we can't help, but think how cute Baby Luna is in those ears. UGH THIS IS SO HARD TO CHOOSE!"

In another lazy Sunday appreciation pic, John shows off how he likes to spend his mornings with the #1 girl in his life.

Yes Baby Luna, we all gawk at the flyness that is John Legend the same way too!

In a flashback Friday post, Chrissy shares an intimate moment between her and John when Baby Luna was first born.

How many people can call Stevie Wonder Uncle Stevie?

John is already making sure that Baby Luna knows what to team to cheer on!

Baby Luna is looking oh so comfy snugged in her father's arms while vacationing in St. Tropez.

Next
The Most Stylish Celebrity Honeymoons in History
Advertisement - Continue Reading Below
This content is created and maintained by a third party, and imported onto this page to help users provide their email addresses. You may be able to find more information about this and similar content at piano.io
More From Celebrity
Kourtney Kardashian Is Dating Travis Barker
Priyanka Chopra Opens Up About Her New Memoir
Advertisement - Continue Reading Below
Priyanka and Nick on Their Quarantine Quality Time
Priyanka Pulls Back the Curtain
Sussexes Will Return to Social Media, Harry Said
A-Rod Celebrated J.Lo's Inauguration Performance
The 6 Most Expensive Royal Wedding Dresses
Inside Kitty Spencer's Stunning £19 Million Home
Meghan Was Hit With Thousands of Vile Comments
Watch Meghan's Candid 2013 Larry King Interview