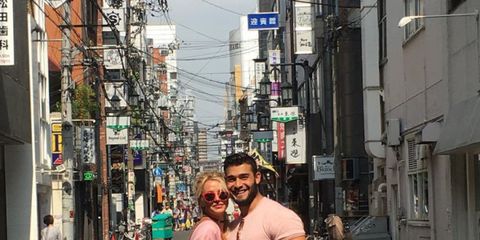 Britney Spears' new relationship appears to be going strong. In a super cute post, Spears shared a photo of her and her boyfriend Sam Asghari, wearing matching pink outfits.

Along with the photo, Spears wrote, "Look who came to see me in Japan 🇯🇵 @samasghari 😉 great matching duo!!!!!!!" The "Toxic" singer's caption makes it clear that she's extremely excited to be reunited with her boyf.

In a majorly cool move, Asghari shared the same snap, with his own caption, "Exploring 🇯🇵 with my lioness." Clearly, he appreciates quite how impressive Spears is, and isn't afraid for the world to know it.

Thinking of tonight's show has me spinning... just like this night in Vegas 😜🌀 Can't wait to see you, #Osaka!!!

Asghari starred in Spears' "Slumber Party" music video in 2016, and the pair's relationship developed from there.