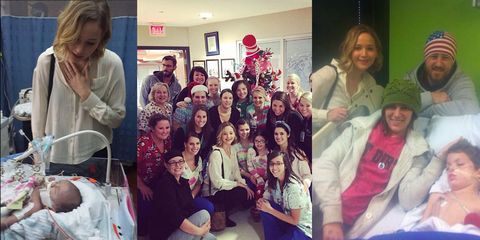 Jennifer Lawrence is back in her home state of Kentucky for the holidays, and she stopped by Louisville's Kosair Children's Hospital for a Christmas day visit to the kids in care.  According to Us Weekly, the trip was a surprise to hospital staff and patients alike (though she did the same thing last year, which is extremely sweet). We didn't think it was possible to like her more than we already do, but, well, here we are.

She also managed to make a very J.Law joke: "Does it look like I'm pooping?" she asked as she squatted for a photo. Classic.

Lori Fradkin executive editor Lori Fradkin is the executive editor of Cosmopolitan.com.
This content is created and maintained by a third party, and imported onto this page to help users provide their email addresses. You may be able to find more information about this and similar content at piano.io
Advertisement - Continue Reading Below
More From Celebrity
Chelsea Handler Skied Naked for Her 46th Birthday
How Kristen Stewart Is Prepping to Play Diana
Advertisement - Continue Reading Below
How to Make the Queen's Favorite Cocktail
The Queen Told Harry to Uphold His Family Values
Twitter Is Thirsting over Prince Harry
Gabrielle Union Just Wore a Daring 2000s Trend
28 ‘Real Housewives’ Who Left The Franchise
Queen Elizabeth Fun Facts
Celebrities Who Don't Use Their Real Names
63 of the Shortest-Lived Celeb Marriages