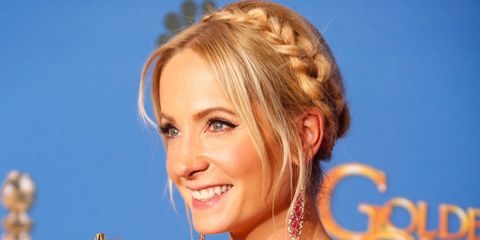 Joanne Froggatt, who plays lady's maid Anna Bates on Downton Abbey, won the Golden Globe for Best Supporting Actress for a TV series, mini-series, or TV movie Sunday night. Froggat's character was the center of one of the most controversial storylines of the series in Season 4, when her character was brutally raped and forced to keep it a secret because of the social stigma surrounding rape at the time.

In her touching acceptance speech, Froggatt spoke out to rape survivors, making it clear that, unfortunately, many women can still relate to Anna today:

"After this storyline aired, I received a small number of letters from survivors of rape, and one woman summed up the thoughts of many by saying she wasn't sure why she'd written but she'd just felt in some ways she wanted to be heard. And I'd just like to say, I heard you, and I hope saying this so publicly means in some way you feel the world hears you."

An Ode to the Golden Globes: 7 Reasons It's Better Than the Oscars