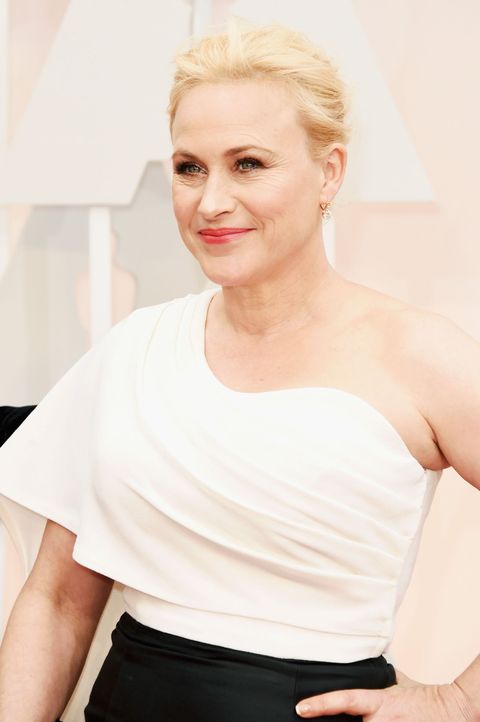 Men started telling Patricia Arquette how to look way back in high school. In an interview with People, she said a classmate voted her "best looking," but told her she should get her teeth straightened so she could pose for Playboy. What a sweet guy.

But Arquette moved on (obviously), and refused to straighten her teeth because "it didn't feel like it would fit who I was inside." She told People it wasn't her "responsibility" to change herself to be attractive to others.

Decades later, though, she says she's still "trapped" in constant dialogue about how she looks, both on and off camera. Yes, even though she just won a freaking Oscar. Though the topic makes sense since her appearance changed over 12 years in Boyhood, she's getting tired of talking about how, yes, people look different as they get older.

She shared a similar insight in an interview with ELLE.com last month, noting that male actors need to get their act together about age. "It is pathetic, and it looks pathetic, when I hear some 55-year-old actor won't play opposite a 42-year-old woman because she is too old for him," she said. "People aren't buying this anymore. They didn't buy it in Magic in the Moonlight." (That movie featured Emma Stone, 26, and Colin Firth, 54 as a couple.)

The "one-sided" conversation about aging isn't stopping Arquette from conquering the industry; she's starring in the spinoff CSI: Cyber along with Dawson Leery himself, James Van Der Beek. But nobody's talking to him about his age.

10 Celebrities Who Are Way Older Than You Think