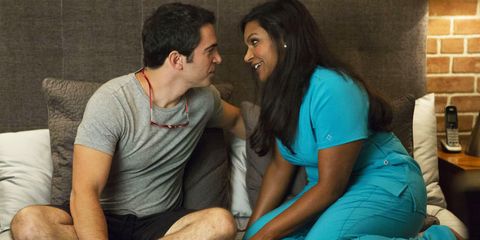 Mindy Kaling just dropped a major truthbomb. Since the beginning of film, actors have been telling us how horribly awkward and boring it is to film sex scenes. Maybe they don't want to make their SOs jealous, or maybe they don't want us plebeians to fully grasp the hot, sweaty action we're constantly missing out on, but Kaling is here to let you know that it's all a lie. A LIE.

"Obviously onscreen sex is not actual penetrative sex, but, as any religious high schooler will tell you, simulating sex can be pretty damn enjoyable as well," she writes in an excerpt from her new book, Why Not Me? "To that I say: the more, the merrier! Most of those people are artists whose job it is to make sure your physical imperfections are cloaked in mysterious shadows. By the end of the shooting day, you'll wish there were more people there."

"People already think acting is the world's easiest and most frivolous job," she writes. "So we all have this tacit agreement to keep our traps shut about the world's best job perk."

Hey, you earned it girl. Enjoy.