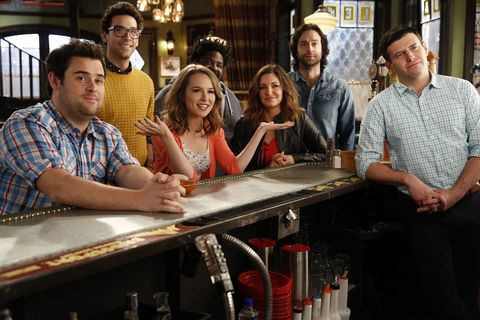 Why is this night different from all other nights? Yes, it's Hannukah, but that's not what we mean (chag sameach to you and yours all the same). No, tonight is the night to curl up on your couch,  bottle of wine in hand, and follow along with Bridgit Mendler and Bianca Kajlich as they give Marie Claire readers exclusive behind-the-scenes commentary on Undateable's live holiday episode.

If you aren't an Undateable superfan (first of all, bye), you'll still want to tune in for this one. Kajlich will be live-tweeting from @marieclaire *in between* takes (the whole show is filmed live, NBD) and Mendler will be taking over Marie Claire's Snapchat, @marieclairemag. Most of the show takes place at a neighborhood bar, so you'll fit right in.

For those of you on the East Coast, peep @MarieClaire on Twitter starting at 7:30pm and follow @marieclairemag on Snapchat at the same time. Don't worry, West Coast, Mendler and Kajlich will keep the lols coming when the Undateable team films the episode for your time zone, too. (If you want to follow along for the entire takeover, it's all happening from 7:30pm to 11:30pm EST / 4:30pm to 8:30pm PST.)