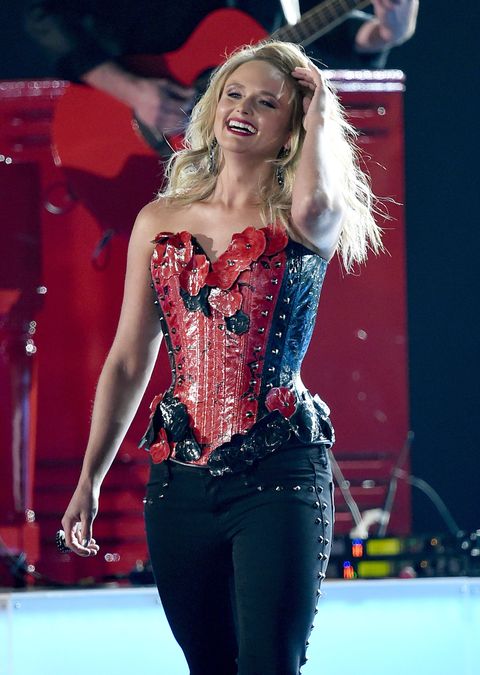 So many things happened during Miranda Lambert's holiday season. 1) She followed her ex-husband's new girlfriend, Gwen Stefani, on Twitter, causing the internet to take a million screenshots. And 2) She started exclusively seeing Nashville musician Anderson East.

"Miranda has been dating for the past few months but recently starting having eyes for only one guy—that guy being Anderson," a source tells E! News. "It's still all pretty new and she is just enjoying getting to know him."

Miranda knows what she does and doesn't "want in a man" due to her past relationships (ahem, Blake shade), and thinks Anderson "is a total stud," which is Southern for "total catch."

"Anderson is a complete gentleman!" the source says. "Miranda gets butterflies with Anderson."

It's so great to see Miranda moving on with such a fine fella. And one with such good taste in tight black t-shirts.

Mehera Bonner Contributor Mehera Bonner is a news writer who focuses on celebrities and royals.
This content is created and maintained by a third party, and imported onto this page to help users provide their email addresses. You may be able to find more information about this and similar content at piano.io
Advertisement - Continue Reading Below
More From Celebrity
Lady Gaga Wears Athleisure and Platform Shoes
Meghan Markle Possibly Shared a Photo of Lilibet
Advertisement - Continue Reading Below
The Kardashians' Most Body-Confident Nude Shoots
What Happens on Katie's Season?
Britney Spears Says She Was Locked in a Bathroom
Kate and William Holiday In Cornwall
Blake Lively Wears a Pink Sequin Dress
Meghan Markle Hangs Out With Melissa McCarthy
Simone's Boyfriend Sent Her the Sweetest Message
Rebel Wilson Recreated This Britney Spears Look