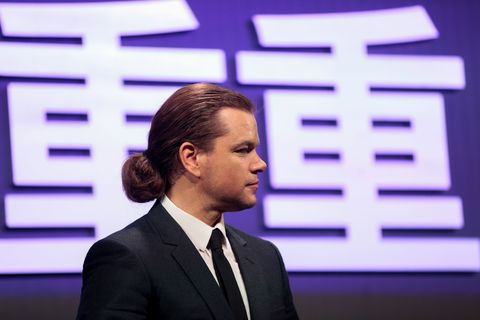 A couple weeks ago, something magical happened. IRL wizard Matt Damon grew a man bun in the space of just one month, sending shockwaves into the very fabric of our nation. So, is his free-flowing hair real? Is it fake? Is it a figment of our imagination? Unclear, but Jimmy Kimmel is having none of it.

The late night host went in on Matt's bun during Monday night's Jimmy Kimmel Live, saying: "While we were away on vacation this happened. That's right, Matt Damon is wearing a bun now. I bet he thought we'd miss that too, he thought he was safe."

Matt's bun kinda made sense when it was spotted during a recent trip to Beijing (perhaps Matt was filming additional footage for The Great Wall?) but there's literally no explanation for what you're about to witness: Matt taking his bun out for a walk at Disneyland.

At this point, we're starting to think Matt's bun is actively trolling Jimmy Kimmel/the world. Either that or he's just a guy who loves his hair, in which case, GET IT, MATT!