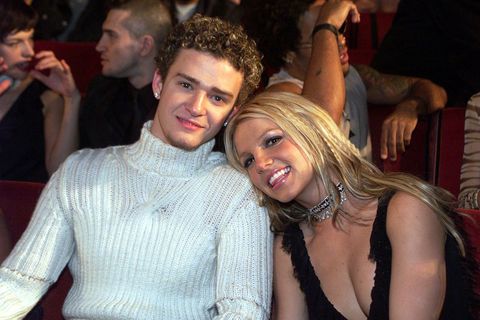 Please cast your mind back to the early aughts, when Britney Spears and Justin Timberlake wore matching Texas Tuxedos to the American Music Awards. It was the best of times, it was the worst of times, it was 2001. But then, in a cruel twist of fate, Britney and Justin broke up and he proceeded to pen several songs about their relationship. (Ahem, "Cry Me a River," anyone?)

But hark! It looks like Britney Spears is ready to put the past behind her, because apparently she wants to make music with her ex.

"I would love to work with...hmmm, Aerosmith seems very good and bright. He's a genius, I think. He's very rock and roll and he sings from the soul," Britney said during the above interview. "Gwen Stefani, I think she's great. Justin Timberlake is very good."