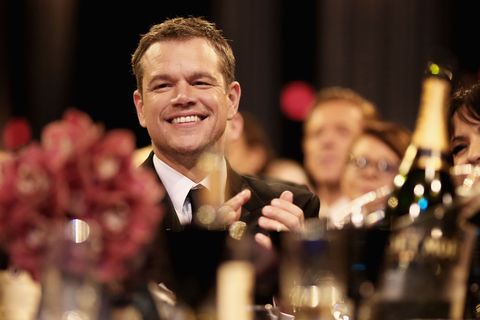 In case you missed the wave of celebrity pregnancy announcements that occurred on Thursday, Amal Clooney is pregnant with twins. The human rights lawyer and her actor husband (ya know, George Clooney?) kept their good news pretty under-the-radar, but one person who knew what was up? Matt Damon.

"I was working with him last fall and he pulled me aside on set and I mean, I almost started crying. I was so happy for him," Damon recently said. "And I was like, 'How far along is she?' And he goes, 'Eight weeks.'"

Clooney's n00b-ness aside, Damon thinks he'll be an amazing dad. "I'm thrilled for him. She's amazing. He hit the jackpot. Just on every level," he said. "She is a remarkable woman. They're gonna be great. They're gonna be awesome parents. Those kids are lucky."