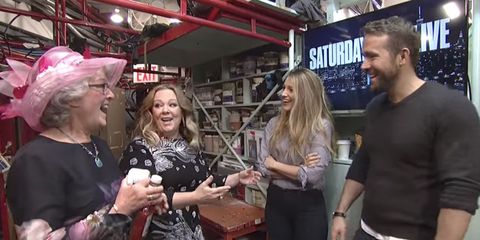 As a Mother's Day treat, Melissa McCarthy whisked an audience member at Saturday Night Live backstage, and there were a lot of surprises. Namely, Blake Lively and Ryan Reynolds were just casually hanging out behind the scenes, ready to chat to McCarthy as she whizzed by.

While there were other treats in store for McCarthy, and audience member Joan, Lively and Reynolds were the most exciting. Alec Baldwin dressed as Trump was a close second.

There was even a llama waiting for them.

But the best moment, by far, was when audience member Joan realized that she was standing in front of Ryan Reynolds. She hugged him almost immediately

While Blake Lively got a hug too, it's clear who Joan was more excited about. But who can blame her? When Lively and Reynolds asked where their seats were, McCarthy made a quick exit, and told Joan, "The Livelys are fine, they can handle it."