Tina Fey made a somewhat rare appearance on Saturday Night Live's Weekend Update—not to play Sarah Palin, but instead to shove a cake into her mouth and take down Donald Trump. A form of protest called "sheet caking," where you don't actually show up to protest white nationalists and white supremacists, but instead "let these morons scream into the empty air."

The reactions to Fey's appearance were generally positive:

Tina tells it! Don't show up for KKK marches. Ignore them. "Let those Morons scream into the empty air" #weekendupdate #snl pic.twitter.com/hAVc6b7jlK

#TinaFey on #SNL tonight was amazing! She was thoughtful and hilarious. When she dipped the grilled cheese 😂! #Sheetcaking

Though some people weren't thrilled that her ultimate message was advocating for people to stay home and avoid protesting.

Watch Fey's appearance above, and feel free to dip a grilled cheese into a sheet cake (something she actually does) while protesting. 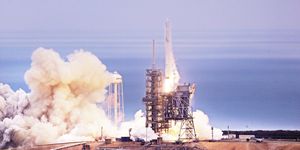 Meet the Woman Who Could Take Us to Mars