Taylor Swift has finally given the people want they've been craving and announced the name of her new album. Welcome to Reputation (out November 10)—a clear nod to the fact that Taylor's own public image took a nosedive in 2016 and early 2017.

The singer also announced the date of her new single, which drops Thursday August 24.

But even more exciting? Her album art is here. And judging from the cover it's going to be entirely about the media turning on her in the wake of her feud with Kanye West (not to mention her breakup with Tom Hiddleston). 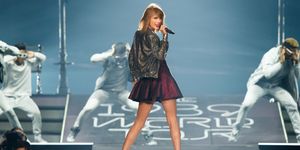