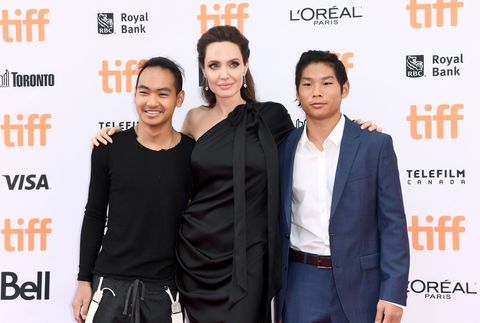 Unlike some other celebrities who would never date another actor, let alone permit their children to dive headlong into that wood-chipper they call show biz, Angelina Jolie fully supports her kids pursuing filmmaking as a career. And why not? At 13 and 16, her sons Pax and Maddox have already worked on First They Killed My Father, a Netflix film that just premiered at the Toronto International Film Festival.

"Maddox worked hard. It's up to him," Jolie said in an interview with E! News. "This [film] is very important to him, but I think so." And while Pax "did a lot of the stills" and Maddox executive-produced the adaptation of human rights activist Loung Ung's memoirs, Jolie said she'd be supportive of all her brood jumping on the movie-making bandwagon. "I might dream. If I am to continue to be in this business, I'd love to work with my children if they choose to be in this business."

Previously, Maddox worked as a production assistant on By the Sea—which Jolie directed and starred in alongside Brad Pitt—meaning a teen's CV is way more stacked than yours. First They Killed My Father opens in theaters and Netflix on September 15.

Chelsea Peng I'm Chelsea Peng, the assistant editor at MarieClaire.com.
This content is created and maintained by a third party, and imported onto this page to help users provide their email addresses. You may be able to find more information about this and similar content at piano.io
Advertisement - Continue Reading Below
More From Celebrity
Spice Girls Reunion Tour Might Feature Posh Spice
Prince Charles' Revealing Joke About the Throne
Advertisement - Continue Reading Below
Some People Think Prince Harry Sounds American Now
Prince Charles May Make Buckingham Palace a Museum
Chrissy's Daughter Luna Is Learning to Read
The Queen Spent a Night in Hospital
Kate and Will Made Emma Watson Crack Up
Blake Lively Called Out an Instagram Account
Khloé and Tristan Have "No Label" Right Now
Kate and Will Share Intimate Moments in New Photos