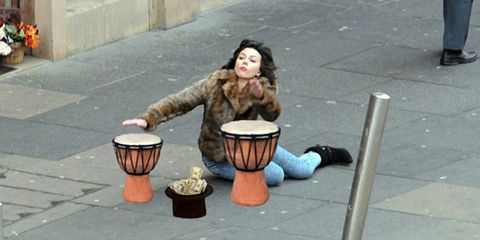 Remember when Scarlett Johansson tripped and fell in the street and the best meme ever was born? Nothing makes celebrities more relatable than when they fall over in public (we've all been there), so consider this gallery of famous face-plants our gift to you.

A near-miss, but a supremely graceful one at that. While working the Time 100 Gala red carpet Tuesday, the model's stiletto caught on her dress, causing her to stumble. But a true professional, she recovered with a dazzling smile, then kept on like nothing had happened.

It's becoming a trend! After falling while on tour in Canada, the singer fell yet again while performing in Jacksonville, Florida. "Life's about taking falls, and life's about getting back up!" he said. Nice save.

Selena Gomez took a fall—her first on the Revival tour—and handled it like the pro that she is. "First fall on the whole damn tour, can you believe it, Tulsa?! Well, I'll be damned," she said laughing before continuing her performance. #KillinIt

While playing a show in Saskatoon, Canada, the singer took a dive on stage (well, more like he disappeared into a sink hole), but fear not—he's a-okay.

Spinning around to grab the mic after giving a powerhouse performance live on Jimmy Fallon, then just crumpling to the floor—we've all been there. We've just never had Jimmy Fallon get down with us in solidarity.

Poor Justin was just trying to enthusiastically sing "Sorry," when he slipped and fell in a giant puddle. Fortunately, he handled it like a champ—though really that puddle is the one who should be apologizing.

7 of 22
Jennifer Lawrence (for the third time)

Oh, JLaw. At the Madrid premiere of Mockingjay: Part 2, she experienced a series of tumbles, one of which grounded her for some time. Luckily, there were a lot of bodies around to shield anything her plunging Ralph Lauren gown might have revealed.

High five to Modern Family's Sarah Hyland, who tripped at the 2015 Teen Choice Awards and handled the moment by putting her arms up and yelling out "F*CK." (New hero alert.)

The Queen of Pop experienced a cape malfunction when she fell *backwards* during the 2015 Brit Awards. That happened.

Jennifer Lawrence has fallen not once, but twice, at the Academy Awards. Here she is trying to break her fall by grabbing onto the shoulder of the woman in front of her. Yep.

Demi Lovato slipped and fell while performing her new single "Cool for the Summer" for a pool party concert. The good news is she had a sense of humor about it, hence the Instagram video. (Also, shout out to that giant inflatable ice cream cone, which is the true star of this moment.)

Look, who hasn't fallen over while screaming out the lyrics to "Bang Bang"? Ariana Grande is just like the rest of us.

It's been almost exactly a year since Iggy Azalea rapped so hard that she fell off stage, but the moment has been immortalized in video form. We are all Iggy.

Harry Styles wins at falling over. His method is slow yet determined, charming yet peculiar—a true model for the rest of us.

While singing "I Kissed a Girl," Katy Perry jumped into a giant cake and fell over immediately after – which is to be expected when you're entire body is covered in icing. No judgment.

Rihanna's fall is so elegant that it almost looks choreographed. Almost.

To be fair, who wouldn't fall over while doing air guitar on a piano?

Jennifer Lopez fell while jumping off a tower of shirtless men, so you might say it was worth it.

Poor Ed thought it would be a good idea to leap across his stage while singing. It wasn't, but he handled it gracefully.

That moment when the stage swallows you whole and tries to eat you.

Olly Murs proves that stairs are out to get us. 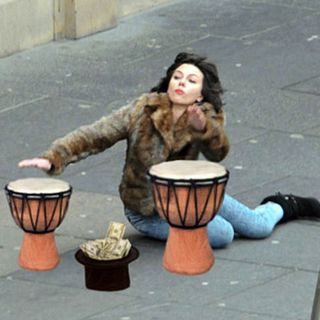