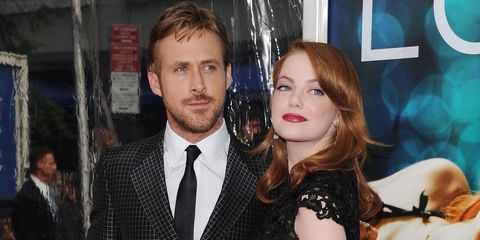 Sometimes, when two people meet—it's magic. Sometimes, when two actors meet—it's magic but in a pretend-sort-of-way that makes us, The Public, wonder out loud in theaters, cubicles, and brunch places: "Do you think they're actually dating? They have to be, right? They have so much *chemistry*!" Here, a look at six couples who can't seem to stay away for too long. (On screen, that is.)

J.Law and B.Cooper—a winning duo. The two starred in Silver Linings Playbook (which won Jennifer an Oscar, NBD), American Hustle (okay, so they weren't lovers, but still...), and finally Serena. (They'll also be appearing together in Joy, though again—not romantically. Whatever.)

They first joined forces in The Wedding Singer (1998) as two young souls just trying not to fall in love, before reuniting in 50 First Dates (2004) where he played a persistent suitor and she an, um, forgetful lady. The trifecta was complete in 2014, when they starred in Blended about two single parents who end up falling in love.

Two gorgeous people who have *that* kind of spark? Not surprising they've been in two movies already (Crazy, Stupid, Love in 2011 and Gangster Squad in 2013) and are currently filming La La Land, a movie about a jazz pianist who falls in love with an aspiring actress. (Naturally.)

Ah, the pair that started it all. First appearing together in Joe Versus the Volcano in 1990, the two went on to rekindle the magic twice: in the romantic classics Sleepless in Seattle (1993) and You've Got Mail (1998).

Mila Kunis and James Franco were on an on-screen pair starting in Date Night in 2010, Oz: The Great and Powerful in 2013, and Third Person in 2014.

The two—who also happen to be very funny real-world commentators—starred as young lovers in the 2009 film Adventureland before reappearing in the action-packed stoner film American Ultra. Now, they're filming an untitled Woody Allen project. We'd say the teaming works.

Samantha Leal Senior Web Editor I'm Sam, the senior editor at MarieClaire.com.
This content is created and maintained by a third party, and imported onto this page to help users provide their email addresses. You may be able to find more information about this and similar content at piano.io
Advertisement - Continue Reading Below
More From Celebrity
Here's Blue Modeling Icy Park Like a Pro
Selena Gomez Photographed Flipping Off Paparazzi
Advertisement - Continue Reading Below
How Kate and Will Feel About the Sussex Oprah Chat
Serena Williams Stuns in a Glamorous Red Robe
Sophie Turner and Joe Jonas Took the Cutest Selfie
Bella Hadid Fell on the Runway & Adorably Reacted
Sussexes' Philanthropic Project Hits a Milestone
Celebs That You Forgot Were on MTV Shows
35 Unforgettable Royal Wedding Scandals
The Best TV and Movie Wedding Dresses of All Time