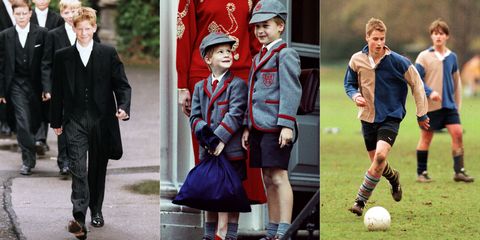 Even the royals take lots of back-to-school snaps.

Nothing beats getting an escort from mum and dad on your first day of school. And Prince William was no exception: Here, his parents walk the 3-year-old to Mrs. Mynors' Nursery School on September 24. The school, in London's Notting Hill, was only a five minute walk from their home at Kensington Palace. And tuition was about $850 a year.

The little prince even had a hook with his name on it for his sweater and backpack. Aww.

On January 15, he donned an adorable little uniform and started at London's Wetherby School with his mom, Princess Diana, in tow.

That fall, it was Prince Harry's turn. On September 16, the whole family accompanied him to Mrs. Mynor's. According to Ingrid Seward's book William & Harry, the young prince had a difficult time adjusting to school initially.

Prince Harry played a shepherd in his school nativity play on December 6. So sweet!

Brotherly love. Finally, both boys were together at the Wetherby School, where they started on September 11.

On June 11, Prince Harry ditched the sack from his school's "sports day" (a.k.a. field day) for the sack race.

Roommates! Prince Harry followed his brother to Ludgrove, where both boys shared dormitory rooms like these — with four other boys — for each of their five years at the boarding school.

After studying for the entrance exam, Prince William was accepted to Eton, the prestigious boys' boarding school located in Eton, Berkshire. His parents, who were separated, both came to get him settled at the Manor House September 5. Two days later, he started class at Eton, where his mother's father and brother also attended.

After their mother's 1997 death, Harry struggled academically at Ludgrove, so he spent an extra year there before applying to Eton. The additional prep paid off. Accompanied by his father Prince Charles, he began his first day of school at Eton College on September 3.

At Eton, the athletic William captained his house team (Gailey's) in the semi-final of an inter-house tournament that June. He was also on the same rugby team as actor Eddie Redmayne, who said, "I always felt slightly sorry for Will because everyone wanted to tackle the future King of England. He took all the hits."

To mark his 18th birthday, Prince William posed for a formal portrait — wearing a Union Jack vest emblazoned with the words "Groovy Baby."

He even cooks! The prince tackled chicken paella for cooking class at Eton. In interviews, he has credited the school for treating him like an ordinary student.

On September 23, Prince William and Prince Charles roamed the campus for William's first day of school at St. Andrews University in Scotland. He enrolled under the name William Wales. News of this caused a temporary increase in the number of applications to St Andrews, mostly from young women who wanted an opportunity to meet him.

Meanwhile, Harry continued to do well at Eton. He led his team, The Oppidans, in the traditional "wall game" on November 24.

As a senior, he even played Conrade (in this masked ball scene) in a school production of Shakespeare's Much Ado about Nothing in March.

Prince Harry also enjoyed spending down time in his dorm room at Eton. His desk featured a framed portrait of his mother.

Like any 18-year-old boy, Harry carried out his belongings in a trash bag when he moved out on June 12. (At least he carried the suit on a hanger!) Before enrolling at Sandhurst Military Academy, he took a gap year, too.

Here, the pensive prince lingers in St. Salvators Quad at St. Andrews on November 15. Or, he could have been posing for a Ralph Lauren ad. Either way, you're welcome.

Prince William, who lived with then-girlfriend Kate Middleton and two roommates in a flat, liked to play pool at a bar with friends.

Prince Charles gave his younger son a friendly punch goodbye on his first day at Sandhurst Military Academy May 8. At the elite school, the 20-year-old royal was treated like any other recruit and called Mr. Wales or Officer Cadet Wales.

He also celebrated that day with girlfriend Kate Middleton. And we all know how that story ended. 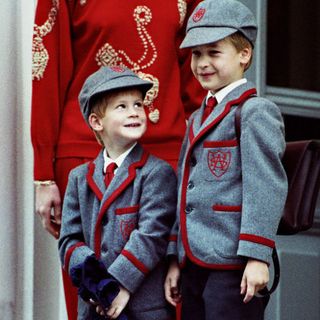