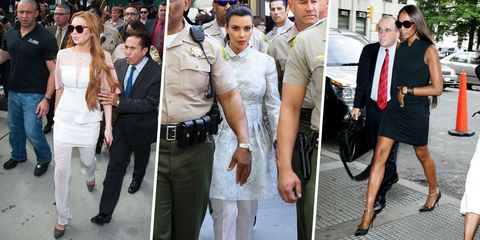 Just as the legal system is theater, celebrity court appearances require costumes. Here, a lesson on how famous people dress to win—or not. Justice may be blind, but the public definitely isn't.

What: An Italian widow vibes that says "I'm dead chic, but I'll still look remorseful for driving under the influence"

Why: "I'm dead chic, but I'll still look remorseful for driving under the influence"

What: A dark, notch-collar suit to testify in a copyright lawsuit alleging that he and Timbaland infringed on the rights to a sample used in "Big Pimpin'"

Outcome: Won the suit, in both senses of the phrase (I'll see myself out)

What: A square-neck shift dress

Why: As a successful professional who's also become a celebrity in her own right, she has to be tightly controlled and hyperaware of her image at all times. Enter her fashion soulmate Jackie Kennedy.

Her *other* court outfit

What: A rather schlubby suit for him; a quiet sleeveless dress for her

Why: Twofold: to be taken seriously, and to not let their movie-star status overshadow the fact that he's testifying before a Senate appropriations subcommittee with 70 words in the title to talk about his non-profit

What: A blue wig and a jersey of some sort. The rest cannot be determined.

Why: Unknown, but probably :(

What: Neutral separates that weirdly didn't mask her net worth very well. (There was a Birkin and a touch of mink. She was on trial for insider trading.)

Why: Martha DGAF, and she is an indominable spirit

Outcome: Went to jail but had the best time there

What: Is this a fashion ad or what?

Why: When you're seeking $46,000 in monthly child support from François-Henri Pinault...

Why: What else would you wear to give evidence to the Leveson Inquiry about how the paparazzi were ruining your life?

Outcome: £100,000 in damages, quite a bit of respect for revealing the dark underbelly of being famous

What: Somber black and not his usual madcap mix

Why: When there's video of you saying you love Hitler, you gotta play it safe.

What: The prototypical power-lady uniform

Why: Probably not the best strategy when you're accused of throwing a phone at a maid, as she was here, but there really is nothing better when you want to appear Khaleesi-level untouchable.

Another example from those court dates

What: Azzedine Alaïa cardigan and shift dress, an impeccable beehive

Why: Her pristine ensemble contrasts with the griminess of the 2010 trial of former Liberian President Charles Taylor, at which she testified. "Are you a boastful person?" she was asked at one point. "Not really."

Why: Expertly executed children's art project as a symbol she should be awarded sole custody?

Outcome: Her divorce from architect Peter Cook was finalized in 2008, but not without public ugliness

What: Pearls and a dark dress

Why: Interesting how it's the exact "wife of disgraced politician" look, but on Rihanna, it projects quiet strength.

Outcome: It's safe to say everybody took her side.

What: A high-necked Victorian blouse and the grown-out result of her troubles in 2007 at a custody hearing over her two sons.

Why: Ain't nobody more proper than the Victorians

What: A calculatedly demure reference to Audrey Hepburn

Why: Not even the most hardhearted of judges could send Audrey Hepburn to jail, right? Especially when she's pregnant?

Outcome: 82 minutes in the slammer. BOOM.

What: Earth tones, loud ties, and the smug expression of a man who knows he's going to get away with it

Why: TFW your face can see the future but you still have to maintain some sense of propriety with your clothes.

What: Suits "a couple of sizes too large to make her look frail and emphasize her victim role."

Why: Well, she was kidnapped and brainwashed into robbing banks with a left-wing terrorist group.

Outcome: She served 22 months before Jimmy Carter pardoned her.

What: Her most Movie Star getup and a whole lot of gumption

Why: A guy stole her diamonds at gunpoint, okay?

Outcome: He was indicted; she was fawned over in the papers.

What: A bucket hat, tiny sunglasses, and a lavender pashmina

Why: To support Bobby Brown

What: Birkins, fur collars, and no cleavage—let alone pasties—in sight

Why: She might have been found guilty of perjury, but at least her sartorial efforts showed respect for the judge.

Why: "I am God and my lawyers are my twelve disciples, do not fuck with me" can only get one so far.

Outcome: She pleaded guilty, and agreed to enter a drug treatment program to avoid jail time.

What: A different bespoke waistcoat and military jacket for very single day of his 2005 molestation trial

Why: The military details because that *would* be appealing to someone fighting his own personal war. The slim fit because they're "almost like dance clothes." The decadence because he could. Jackson reportedly brought in magazines for inspiration, telling his tailors Michael Bush and Dennis Tompkins, "This is what the world's wearing. Top it." Bush said he woke at 3 a.m. to personally deliver each costume to the late star's Neverland Ranch.

And a (non-political) armband.

What: A modified three-piece suit, just like the ones responsible adults wear

Why: Didn't you hear this is what responsible adults wear?

Outcome: 45 days in jail for violating a driving probation 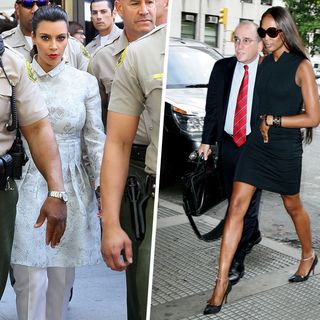