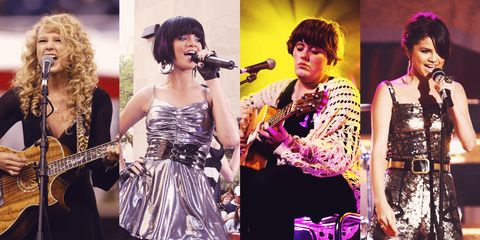 It's a well known fact that artists like Taylor Swift, Selena Gomez, and Beyoncé dominate the charts and the best dressed lists. But let's re-live what they looked like during some of their earliest live performances, a time before A-list stylists and glam squads. Memory lane, right this way.

Selena and her old backing band The Scene performed "Falling Down" from her first album Kiss & Tell on Dancing With the Stars way back in 2009. So many sequins, so little time.

In one of her earliest televised performances, Taylor Swift belted out the National Anthem at the Detroit Lions/Miami Dolphins Thanksgiving Day game in 2006—complete with her acoustic guitar and old-school curls.

Here's Bey performing with Destiny's Child at one of the band's first-ever shows (this one was in Mountain View, California) on their 1998 tour—back when the girls all wore coordinating outfits.

Rihanna performed on the Today Show in June 2007—wearing a short, metallic party dress that would make any '90s Barbie jealous. (This was just a few months before she embarked on her Good Girl Gone Bad Tour.)

In 2007, a full two years before her The Fame Ball Tour, Lady Gaga performed at Lollapalooza in Chicago wearing a bra that looked like disco balls. TBH, she'd probably still wear this today.

Back when he was tearin' up your heart with NSYNC in 1999,  Justin Timberlake performed in Vegas wearing this all white, super roomy ensemble.

In 2007, Adele looked more like a folk artist than the soulful singer we know today. This is her performing at the Great Escape Festival on May 19, 2007 in Brighton, England.

In 2008, a year before her first headlining tour, Katy Perry wore a pink seashell dress and Zooey Deschanel bangs for a performance at the South by South West music festival.

So it isn't exactly a professional performance, but this picture of a young Justin Bieber singing on the street in Canada circa 2007 will make you yearn for his "Baby" days.

When she was traveling for her first tour in 2002, Pink performed in open coveralls and a hot pink bra, because why not? 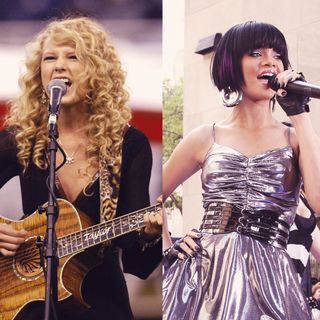 Advertisement - Continue Reading Below
Kayleigh Roberts Kayleigh Roberts is the weekend editor at Marie Claire, covering celebrity and entertainment news, from actual royals like Kate Middleton and Meghan Markle to Hollywood royalty, like Katie Holmes and Chrissy Teigen.
This content is created and maintained by a third party, and imported onto this page to help users provide their email addresses. You may be able to find more information about this and similar content at piano.io
More From Celebrity
William Will Suffer "Worst" from Harry's Memoir
Simone's Boyfriend Sent Her the Sweetest Message
Advertisement - Continue Reading Below
Harry's Friends Don't Want to Be in His Memoir
Will & Kate's Modern Approach to Raising George
Meet Simone Biles's Super Supportive Parents
What Happens on Katie's Season?
Bennifer Recreated Their 2002 PDA Moment
Why Harry's Memoir Release Date Has Upset People
The Royals Are Worried About Prince Harry's Memoir
Gabrielle Union Debuted a New, Short Haircut