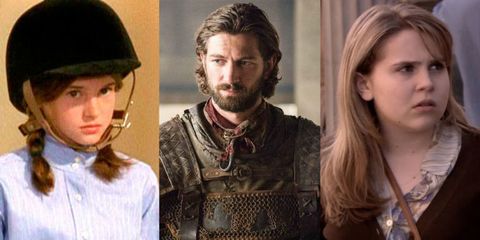 Sometimes, actors have to leave a show before the show leaves the air. When that happens, studios can either write the character out or bring in a new actor to take their place. Here are 13 shows that opted for the latter.

In 2013, Once Upon a Time had to recast Robin Hood, with Sean Maguire replacing Tom Elis in the role.

HBO
3 of 13
Daario Naharis on 'Game of Thrones'

In 2014, Game of Thrones recast Daenerys' ongoing love interest, Daario Naharis. Ed Skrein played the character in Season 3, but what replaced by Michiel Huisman in Season 4. The actors look so dissimilar that fans had to hear Huisman called Daario to recognize the switch.

HBO
4 of 13
Tommen Baratheon on 'Game of Thrones'

Game of Thrones has no qualms about recasting characters. In Season 4, Dean-Charles Chapman took over the role of Tommen (he was previously played by Callum Wharry and an older actor was required as the character's role in the story grew). Fun fact, Chapman wasn't new to GOT when he stepped up to play Cersei's youngest son. He played another Lannister—Martyn Lannister, to be exact—in Season 3.

Game of Thrones has had not one, not two, but three separate Mountains. The first actor to play Gregor Clegane was  Conan Stevens, in Season 1. In Season 2, Ian Whyte took over the part. Finally, Hafþór Júlíus Björnsson took over the role in Season 3 (and he's probably the actor you think of when you think of The Mountain).

Starz
6 of 13
Spartacus in 'Spartacus'

Spartacus star Andy Whitfield had to leave the series after Season 1 to battle non-Hodgkin lymphoma (he passed away in 2011). Liam McIntyre took over the part after Whitfield's departure.

The running joke on Arrested Development was that Ann was forgettable, so it's possible you missed this recast. Alessandra Torresani played her during her first appearance in Season 1, but when Mae Whitman took over the role in Season 2, she stuck.

Carol is an iconic Friends character, but the part was originally played by Anita Barone. The Carol we all know and love, Jane Sibbett, quickly took over the part.

Warner Bros. Television
9 of 13
Kaitlin Cooper on 'The OC'

Eric's older sister, Laurie, was originally played by actress Lisa Robin Kelly. In Season 6, however, she was replaced by Christina Moore.

TV sisters are prime for recasting. Cory and Eric's younger sister, Morgan, was originally played by Lily Nicksay. However, the character was basically written out of the show for the first half of Season 3 and, when Morgan reappeared in the second half of the season, she was played by Lindsay Ridgeway.

Carsey-Werner Productions
12 of 13
Becky on 'Roseanne'

One of the most famous recasts in television history is that of Becky Connor on Roseanne. Lecy Goranson was the original Becky, but she left the show in Season 5 to attend Vassar College, so Sarah Chalke stepped in as the new Becky.

Another iconic recast is that of Aunt Viv on The Fresh Prince of Bel-Air. Janet Hubert-Whitten was replaced by Daphne Maxwell Reid in Season 4. Hubert-Whitten was allegedly difficult to work with, and series star Will Smith himself spoke out about the tension after she left the show.

Next
How to Live Your Best Life: a Guide by Céline Dion 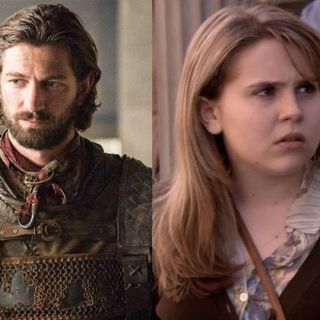 Advertisement - Continue Reading Below
Kayleigh Roberts Kayleigh Roberts is the weekend editor at Marie Claire, covering celebrity and entertainment news, from actual royals like Kate Middleton and Meghan Markle to Hollywood royalty, like Katie Holmes and Chrissy Teigen.
This content is created and maintained by a third party, and imported onto this page to help users provide their email addresses. You may be able to find more information about this and similar content at piano.io
More From Celebrity
Chelsea Handler Skied Naked for Her 46th Birthday
How Kristen Stewart Is Prepping to Play Diana
Advertisement - Continue Reading Below
How to Make the Queen's Favorite Cocktail
The Queen Told Harry to Uphold His Family Values
Twitter Is Thirsting over Prince Harry
Gabrielle Union Just Wore a Daring 2000s Trend
28 ‘Real Housewives’ Who Left The Franchise
Queen Elizabeth Fun Facts
Celebrities Who Don't Use Their Real Names
63 of the Shortest-Lived Celeb Marriages