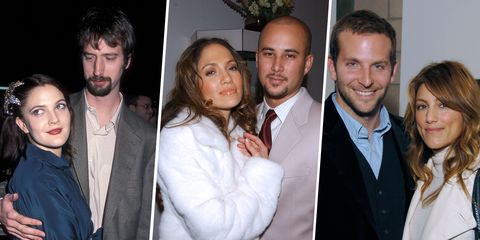 With weird schedules and hot costars and "friends" who become anonymous sources, marriage in Hollywood is even more complicated than it is for us regular folk. Which might explain the following 13 curiously brief encounters, from Kim and Kris Humphries to...click through to see the whole batch.

Notes: We are going from longest to shortest, so buckle in. Hunt dated Azaria—you might know him for his voice work on the Simpsons—for five years, but they separated after not even one together. Irreconcilable differences—they'll get ya every time.

Notes: When the lead-up to the marriage lasts longer than the marriage itself. After they met in 2000, Barrymore and the comedian frequently teased the media that they planned to wed. They eventually did in July 2001...then separated that December.

Notes: "We were two stupid kids who had no business being in a relationship in the first place," Bush said during a 2014 appearance on Watch What Happens Live. "To all the other costars who've worked it out, more power to you." They did, however, keep it together professionally on One Tree Hill, though it's easy to see how they could've ended up on this list.

Notes: They got engaged twice and had three ceremonies, which ought to have been a sign.

Notes: They fell in love on the set of her "Love Don't Cost a Thing" music video in 2001, after which Judd was thrown to the media sharks. While he has said the pressure of fame wasn't what eroded their relationship, he also said this about her other relationships. "I think that it's that it is work. It's whether you want to work on it or not. Everyone has baggage and problems. It's whether you want to deal with those problems." Fair enough.

Notes: In an interview with Howard Stern, Cooper said the short-lived union "was just something that happened." Damn, son.

Notes: So...someone didn't bother writing a mission statement/syllabus? Celebrity divorce announcements are always pretty bizarre, but this one takes the "u wot m8" cake: "The miscommunication of the objective of their marriage at the start is the only reason for this annulment." I...thought...it was always...love?

Notes: Or 108 days. Prior to Cage, Presley had been married to Michael Jackson for 9 months.

Notes: She knew on their honeymoon that it wouldn't work out.

Notes: Before Tom Green, there was Thomas, a Welsh bar owner 14 years Barrymore's senior. They knew each other for six weeks, which is coincidentally about how long they were husband and wife before she filed for divorce.

Notes: He filed first, claiming he was inebriated when it happened. He then rescinded the claim. Six months later, *she* called it off. (Then, as we all know, he went to North Korea.)

Notes: Never forget this tale of woe, about how one of the world's most famous pop stars and her childhood friend were torn apart. (Although the official reason was that she "lacked understanding of her actions to the extent that she was incapable of agreeing to marriage.")

Next
The Biggest Celeb Beef the Year You Were Born 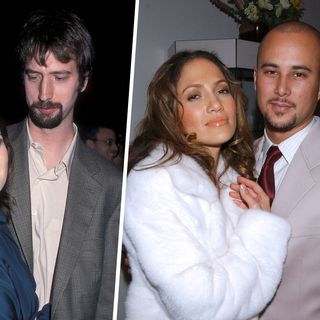