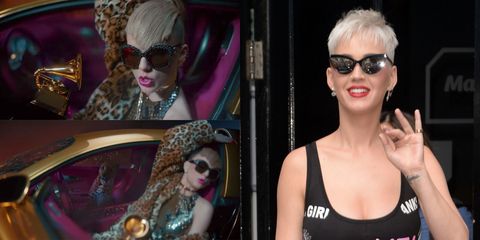 Taylor Swift is a woman who adds every detail with purpose—and her latest video "Look What You Made Me Do" is full of little easter eggs and nods to her rivals and scandals over her years in the spotlight. Here, some of the most sneaky ones broken down. Because that last 45-second old Taylor Swift exchange wasn't even the start of it...

Swift channels rival Katy Perry here with the bleach-blonde hair and wild leotard/cheetah motif, perhaps a nod to the tiger imagery Perry associates with herself. She also throws extra shade with the Grammy, since Katy Perry's never won a  Grammy...Meanwhile, Taylor's won 10.

Swift pokes fun at and acknowledges those critical of her "model" squad and the fact they all look similar and perfect (the NY Post, for example, ran an article in 2015 calling it a cult).

Swift in her "streaming co." headquarters where she's breaking in to try to get some of their money is alluding to her removing her music from streaming companies because they weren't giving her and other musicians enough royalties.

Swift wrote an open letter to Apple in 2015 because of their refusal to pay new artists royalties during their three-month trial period. "I find it to be shocking, disappointing, and completely unlike this historically progressive and generous company," she wrote at the time. Apple promptly reversed their policy.

Swift most notably stayed off Spotify for years because she thought it could hurt album sales. She here is mocking people who think she's just materialistic and after money from the streaming companies.

Note the cat mask Swift is wearing: Swift is obviously a huge fan of cats. Olivia and Meredith, her cats, have become part of her brand.

This is from 2009's "You Belong With Me" video—but the names have changed to her squad members. Selena [Gomez], Blake [Lively] & Ryan [Reynolds], Lena [Dunham], and more are on there.

The old Taylor Swift buried is Swift from the 2014 Met Gala. This look was from the literal start of her 1989 era; "Shake It Off" would come out just a couple months after the May event. "Out of the Woods" Swift—the last Swift seen in her 1989 era—digs her grave.

After Kim Kardashian posted her Snapchats of Taylor Swift and Kanye West discussing "Famous" last year, Jenner posted this "tea time" Instagram shortly after that was widely perceived to be shade to Swift. Swift here does her own take of Jenner sipping actual tea with her legs crossed in a similar dress (and with Jenner's sleek straight hair).

Although "Look What You Made Me Do" was shot months ago, Swift must have known at the time she'd only seek $1 in her sexual assault case against a former radio DJ in Colorado . In her tube full of jewels and valuables, that $1 the jury awarded is beside her—perhaps a symbol of just how much the victory meant to her.

As Swift's lawyer said during his opening statement during the trial, the dollar is meant to help people understand that "you can say no when someone puts their hand on you. Grabbing a woman's rear end is an assault, and it's always wrong. Any woman—rich, poor, famous, or not—is entitled to have that not happen."

On the tub itself: While some believe it's a reference to Kim Kardashian, fans note that Swift actually talked about the "Blank Space" character she created—off of the media's serial dater portrayal of her, of course—literally being in a tub like this. "She traps them [the guys she's seeing] and locks them in her mansion and then she's crying in her marble bathtub surrounded by pearls," she said of the persona during an acoustic performance of "Blank Space" in the Grammy museum in January 2016.

The tropical print Swift's wearing may be a nod to her ex-boyfriend who not only collaborated with Katy Perry (and wore similar fashion) in his "Feels" music video but also to date has released two songs about her ("Ole" and "My Way").

Swift has her own private jet, hence the plane appearing in the video. Tropical shirt Swift spray paints on the plane "Reputation"—something Harris himself helped take down last summer when he tweeted to Swift to stop trying to drag him after he accused her team of leaking that she helped write "This Is What You Came For." "I figure if you're happy in your new relationship you should focus on that instead of trying to tear your ex bf down for something to do," he tweeted. "I know you're off tour and you need someone new to try and bury like Katy ETC but I'm not that guy, sorry. I won't allow it."

Crop tops were Swift's signature 1989 style, hence the slight variation of top worn by the men in this video, But the "I Heart TS" Swift is a direct reference to the tank top Tom Hiddleston wore when he was dating Swift at her Fourth of July party in 2016. Hiddleston became a punchline because of it.

Fans point out that this was meant to illustrate Swift's eight high-profile relationships during her years in the spotlight: Tom Hiddleston, Calvin Harris, Joe Jonas, Taylor Lautner, Harry Styles, Conor Kennedy, Jake Gyllenhaal, and John Mayer. They all wear "I Heart TS" tops.

12 Zombie Taylor Swift From "Out of the Woods"
YouTube/Getty

The imagery here is pretty close to that used to Swift's "Out of the Woods" music video. Fans note that the video itself was literally the last of 1989 and that version of Swift. "She lost him but she found herself," Swift wrote in the music video—which becomes much more eerie if you imagine this video picks up where "Out of the Woods" left off.

Nils Sjöberg was the pseudonym Swift initially used on her and Harris' "This Is What You Came For". Eventually, outlets broke that Swift co-wrote the song, which led to Harris confirming it on Twitter. "Amazing lyric writer and she smashed it as usual," Harris tweeted. "Hurtful to me at this point that her and her team would go so far out of their way to try and make ME look bad at this stage though."

During the last segment of her video, when she announces to the horrified old Taylors she's "getting receipts! I'm gonna edit this later," she obnoxiously takes selfies, a signature move of Kim Kardashian, author of Selfish (who literally did post those Taylor Swift receipts onto Snapchat).

Alyssa Bailey News and Strategy Editor Alyssa Bailey is the news and strategy editor at ELLE.com, where she oversees coverage of celebrities and royals (particularly Meghan Markle and Kate Middleton).
Advertisement - Continue Reading Below
More From Celebrity
Why Harry and Meghan Should Keep Their Protections
Taylor Swift Explains Why She Loves Joe Alwyn
Advertisement - Continue Reading Below
Real Humans Justin & Jessica Are Going to Therapy
Why the Queen Canceled One of Her Annual Events
Channing Tatum Shuts Down Jessie J Hater on Insta
Celebrities Who Are Mistaken for Other Celebs
Dolly Parton, Icon, Started a Viral Meme
Meghan & Harry's Trademark's Been Blocked for Now
Khloe Kardashian's House Has a Room for Extensions
Katie Holmes Stuns in a White Oversize Coat