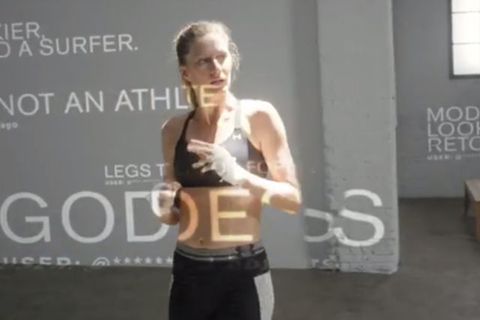 Earlier this week, Under Armour teased us with a short video clip of Gisele Bündchen, the athletic apparel's newest campaign face. In the video, Bündchen, bare-faced, hair in a simple ponytail, wearing a sports bra and cropped leggings, focuses on a lone punching bag. (We can't help but focus on THOSE ABS.) Thirty seconds in, the video cuts out, flashing Under Armour's new women's campaign slogan: "I Will What I Want."

The empowering campaign, part of a big push to raise awareness of and grow Under Armour's women's apparel, is already stacked with an impressive roster of strong and athletic women: Bündchen joins world champion downhill skier Lindsey Vonn, U.S. Women's National Soccer Team standout Kelley O'Hara, rising tennis star Sloane Stephens, and superstar ballerina Misty Copeland. That makes Bündchen the first non-athlete to front an Under Armour campaign. (Her husband, Tom Brady, joined Under Armour in 2010, receiving a portion of the company for his endorsement.)

It's September 4th, and as promised, Under Armour has revealed Bündchen's commercial in full, over on The Cut. In it, the supermodel, her hands and wrists wrapped up in tape, works up a fierce sweat while kickboxing. And she's not just throwing punches and kicks at a punching bag. Around her, comments from internet haters who felt Bündchen was a poor choice to rep Under Armour flash: "Gisele is just a model," "Stick to modeling sweetie," "Is modeling now a sport?"

"We are expecting that there will be people that question the authenticity of our choice and the authenticity of women's choices," Leanne Fremar, Under Armour's SVP and Creative Director of Women's told The Cut, where the commercial debuted. "All of that commentary will be there for the audience to see in real time."

Not only does Bündchen prove her athletic prowess with a sandbag, but she also does something every single one of us has wanted to do at some point: Beat down mean internet trolls.

Related: Proof That Misty Copeland Is the Most Badass Ballerina

Related: Under Armour's Inspirational Campaign Gives Us a New Kind of Role Model

Leah Rose Chernikoff Leah Chernikoff is the former digital director of ELLE.
This content is created and maintained by a third party, and imported onto this page to help users provide their email addresses. You may be able to find more information about this and similar content at piano.io
Advertisement - Continue Reading Below
More From Culture
'The Undoing' Differs Sharply From the Book
'The Undoing' Is Packed With Stars
Advertisement - Continue Reading Below
Differences Between 'The Undoing' Book and Novel
It's Been a Weird Year for 'The Bachelorette'
Did Princess Diana Really Dance to 'Uptown Girl'?
'Bachelorette' Frontrunner Brendan Is an Actor
Everything We Know About Matt James
Zac Clark Could Be a 'Bach' Frontrunner
Who Is Noel Fielding's Partner, Lliana Bird?
We Can't Get Enough of These Jennifer Lopez Films