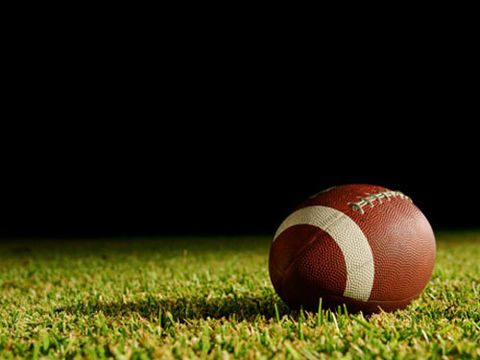 Here's why you want to join a fantasy football league: It makes you actually care about football. When you've got your own team, you have a vested interest in almost every game that is played, which makes watching football all day every Sunday (which — if you're like me — is the only way you're going to see your boyfriend) not just bearable, but fun.

Here's why you want to win a fantasy football league: bragging rights. Forget cash winnings — the ability to remind the man in your life that you beat him at something sports-related is priceless.

The basics of fantasy football are as follows: You draft players from various professional football teams to make up your team. Each week, you play against another team in your league (there are generally about 10 to a league, though it varies). You earn points when your players get touchdowns or gain yards in the real-life games in which they are playing. The team with the most points wins. It's that simple, which might surprise you, given the number of Websites and magazines that are dedicated to the now billion-dollar industry.

When you draft players, you don't just want to pick the best players first. Yes, Tom Brady is a superstar quarterback, but when it comes to fantasy, you want good running backs first, as they score (get touchdowns and gain yards) more consistently. Draft them in the first two rounds. If you don't know that LaDainian Tomlinson is the best running back, do some research. There's more fantasy football information out there than you'll know what to do with, so don't overwhelm yourself. Read some magazines, do some Googling, or just ask your sports-whiz older brother. But again, as a general rule, you are looking for players who tend to get a lot of touchdowns, and who aren't prone to injury — once your player is hurt, you're SOL. One more thing: Make sure the bye weeks of your players are scattered — you don't want to pick players with the same weeks, as you may not have enough to make up a full team when their bye weeks occur.

Once you've got some good running backs, move on to wide receivers and QBs, then a kicker, a tight end, and a defense. While your team is comprised of mostly individual players, you will draft your defense as a team. The mechanics of how the defense gains points is more complicated than you probably care to know, so just pick the defense from the best team you can (i.e, if you've got the Patriots, you're in good shape).

If you've got an 18-man team (they vary from about 14 to 20 players), you'll want to stack your team with about six running backs, five wide receivers, three quarterbacks, one kicker, one tight end, and two defense teams. (Again, this is a very general guideline — if you want five running backs and six wide receivers, more power to you.) However, you only start some of your players, and the only players who can earn points are those that you start. In a usual league, you'll need to start two running backs, one quarterback, two or three wide receivers, one tight end, one kicker, and one defense.

As the season progresses, look to make trades and pick up free agents (players who aren't on anyone's team but are playing well in real life). If you think one of your players has already peaked, start bartering with others in your league.

In the end, winning your fantasy football league has a lot to do with luck. But if you can sit in front of the TV all day, drinking beers, and actually caring about game after game, then hey, you've already won.

Advertisement - Continue Reading Below
More From Culture
The Documentaries You Can't Afford to Miss in 2020
'Killing Eve' Season 3 Review: What's Old Is New
Advertisement - Continue Reading Below
A Super Pink Moon is Coming April 7
Pre-Order These Amazing Books Coming Out in 2020
The 8 Best Rom-Coms of 2020
Got 10 Minutes? Here's What to Watch on Quibi
We Could Be Getting More 'Tiger King'
HBO Is Making Iconic Shows & Movies Free to Watch
Tim Gunn & Heidi Klum Also Wear PJs to WFH
'Parasite' Is (Finally!) Coming to Hulu