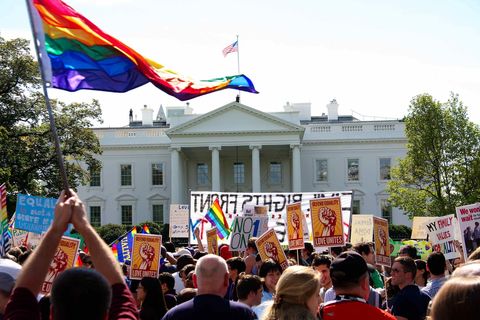 In the wake of Leelah Alcorn's death by suicide, President Barack Obama called for an end to conversion therapy for gays and transgender persons.

Leelah, a transgender teenager, died after writing a suicide note and throwing herself in front of a semi-truck. In her Tumblr, which her family tried to delete, Leelah talked of being forced to undergo conversion therapies with Christian counselors which supposedly tried to "convert" her back to being a boy. Following Leelah's shocking death, a WhiteHouse.gov petition was launched, calling for the end of conversion therapies.

"'Conversion therapies' have been documented to cause great harms and in this case, Leelah's death," the petition stated. "Therapists that engage in the attempt to brainwash or reverse any child's gender identity or sexual orientation are seriously unethical and legislation is needed to end such practices that are resulting in LGBTQ+ deaths."

On Wednesday, President Obama responded to the petition.

"Tonight, somewhere in America, a young person, let's say a young man, will struggle to fall to sleep, wrestling alone with a secret he's held as long as he can remember," President Obama's statement read. "Soon, perhaps, he will decide it's time to let that secret out. What happens next depends on him, his family, as well as his friends and his teachers and his community. But it also depends on us -- on the kind of society we engender, the kind of future we build."

In a response now highlighted on the original petition, Valerie Jarrett, a senior adviser to the president, echoed the president's statement.

"Conversion therapy generally refers to any practices by mental health providers that seek to change an individual's sexual orientation or gender identity," Jarrett stated. "Often, this practice is used on minors, who lack the legal authority to make their own medical and mental health decisions. We share your concern about its potentially devastating effects on the lives of transgender as well as gay, lesbian, bisexual, and queer youth."

A federal ban on conversion therapy would require congressional support. As CNN reports, the American Psychiatric Association found absolutely no evidence conversion therapies work and instead can cause an increase in series issues such as depression and anxiety. Currently New Jersey and California are the only states that ban conversion therapy.

For those looking for support tonight, or any night, The Trevor Project is a crisis intervention resource for young LGBTQ men and women. The number is 1-866-488-7386.

Meet the "Intolerant Jackass Act," a Piece of Proposed Legislation We Can Really Get Behind