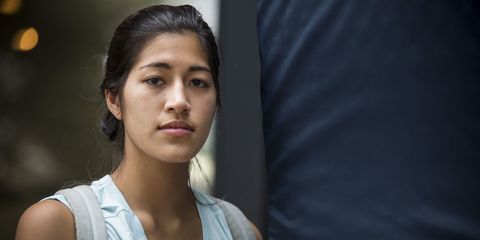 Update, 6/9: The website hosting Emma Sulkowicz's video project was hit with a cyber attack Friday, according to the Guardian.

Keith Anderson, platform support lead at DigitalOcean (who hosts the video), said the site was forced offline. "We can confirm that there was a denial of service attack on Thursday. On Friday there was also a spike in outbound bandwidth coming from the website, likely due to a sudden increase in traffic and unrelated to the attack, so we worked with their web team to resolve the issue and their site is back up and running."

Sulkowicz told the publication she believes the hack was deliberate.

Original post, 6/5: Emma Sulkowicz carried a mattress around campus to protest Columbia University's treatment of a man who allegedly raped her in her dorm room. Now that she's graduated, she's still tackling the subject in her art.

ArtNet News reports her latest project is called "Ceci N'est Pas Un Viol," French for "This Is Not a Rape," and a reference to the famous Magritte painting featuring the words "Ceci n'est pas une pipe." It was filmed during winter break during her senior year at Columbia. The video stars Sulkowicz and an unknown man, and is a graphic portrayal of seemingly consensual sex that turns violent. It may be difficult for people to watch.

And that's the entire point. In a written statement on the project's website, Sulkowicz insists the video is not a reenactment of her alleged rape in her Columbia dorm. "It's only a reenactment if you disregard my words," she writes. "It's about you, not him." She says the video is more about how people view her and shape things into their perception of the world:

"If you watch this video without my consent, then I hope you reflect on your reasons for objectifying me and participating in my rape, for, in that case, you were the one who couldn't resist the urge to make Ceci N'est Pas Un Viol about what you wanted to make it about: rape. Please, don't participate in my rape. Watch kindly."

She also includes a list of questions people who view the video must ask themselves, including, "Do you think I'm the perfect victim or the world's worst victim?" At the time this article was published, the video was not available to view, likely because of high demand on Sulkowicz's web servers.